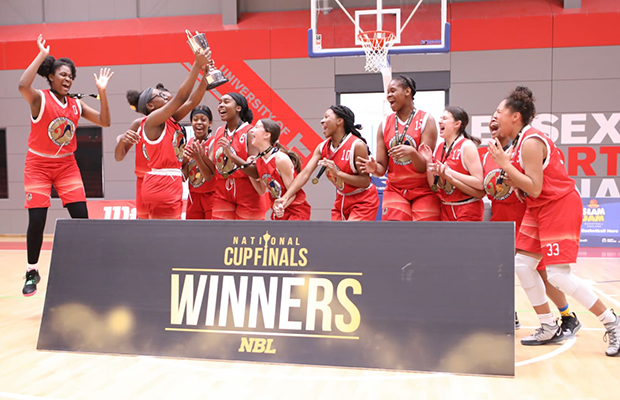 A 26-rebound outing to go with 17 points from Leia Edwards saw Newham Youngbloods get a 65-55 win over Richmond Knights to claim the 2020 Under-16 Girls National Cup.

Edwards led a dominant performance on the glass for Newham, as they won the battle of the boards 65-40 and had answers for every Richmond rally down the stretch.

“I was confident with my girls and I told them this is your game, this is your time,” Youngbloods Head Coach Caroline Charles said.

“We’ve made it to the final four but a Youngbloods team has never made it to a Cup final we’ve always been beaten by Haringey or Sevenoaks but this year everything fell into place.

Edwards’ MVP performance was supported by Ines Goryanova, who had 15 points and 9 assists, and Fatama Jemmah who had 11 points and 8 rebounds.

“At the beginning we were slow,” Edwards said. “I think because we were getting used to how the game was; we haven’t played with a big crowd like that for a while, but jus trying to find what we can do, then second half we came out and smashed it.”