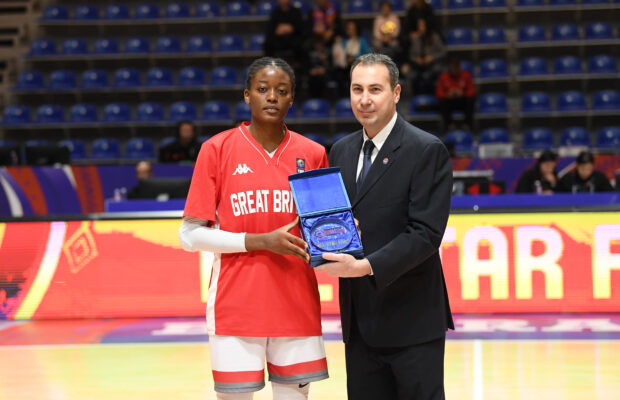 Temi Fagbenle made her second All-Tournament Team on the international stage in less than a year after finishing as the leading scorer at the Olympic Qualifying Tournament in Belgrade.

The 27-year-old center posted 25 points per game across the three games for GB, and also added 4.7 rebounds and 4.3 assists.

⭐ | @TemiFagbenle makes another All-Tournament Team after a strong showing at the #FIBAOQT:

Fagbenle scored a best of 28 points on 12 of 16 shooting in the critical 79-82 loss against Korea on Saturday. Despite facing numerous double teams in the paint, she shot above 60% for the tournament.

The elite post-moves were once again on display from Fagbenle, who also found a way out of the defensive pressure inside by creating for her team-mates with five assists handed out in the two games over the weekend.

The 2017 WNBA champion also made the All-Tournament Team at Women’s EuroBasket 2019 last summer having helped propel GB to a historic fourth place finish.

Fagbenle made a mid-season switch to Perfumerias Avenida in Spain, joining up with GB team-mate Karlie Samuelson with the team performing well in EuroCup Women action.