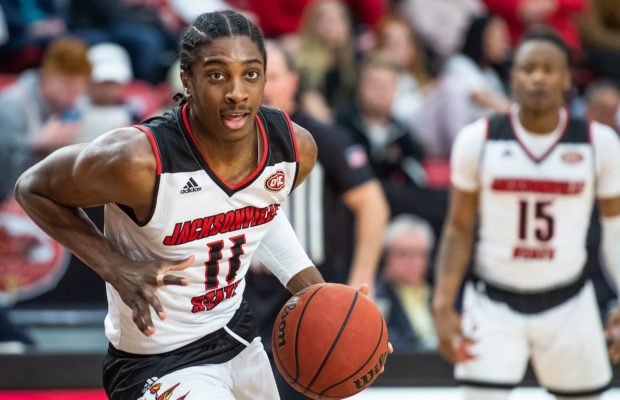 It was another strong month for Brits in College with a number of new career-highs along with more individual awards collected in January.

RJ Eytle-Rock became a regular starter for UMBC (9-13) during the month and had 18 points and four assists against Binghampton before setting a new career-high with 19 points along with seven rebounds and seven assists in a 69-60 win at Hartford. Meanwhile, Dan Akin had 11 points before putting up 12 points, 10 rebounds and four blocks in a 67-63 loss to Albany.

Amin Adamu set a new career-high with 26 points coming in a 68-59 defeat for Montana State (11-9) before adding 20 points. His first double-double came along with a game-winner with 16 points and 11 rebounds in the 62-61 triumph with team-mate Jubrile Belo posting 17 points and 12 rebounds to follow a double-double of 15 points and 10 boards at Idaho.

Tosan Evbuomwan was back in the starting lineup for Princeton (8-8) and book-ended the month with eight-point displays, the first of which in a 64-78 win at Penn to open conference play in the Ivy League with his side going perfect through January. The freshman forward contributed six points, three rebounds, two assists, a steal and a block in a second win over Penn in the month to help earn the Rookie of the Week award.

Boban Jacdonmi had back-to-back games in double figures having returned from injury after missing the majority of December. The redshirt senior posted his first double-double since opening night with 16 points and 12 rebounds in a 65-63 loss for Southern Miss (6-16).

Hosana Kitenge hit double figures for the first time with 12 points along with six boards in a 74-72 victory for Coastal Carolina (11-11) before adding 10 points and eight rebounds in a following dominant win.

There was also a season-high for Shaquille Walters after putting up 15 points to go with nine rebounds in a narrow 64-66 home defeat for Northeastern (11-11). The junior guard had tied the game with 13 seconds left with a three-point play to finish 6 of 11 from the field, but his side suffered a loss in the dying seconds with William & Mary repeating the narrow victory later in the month.

Akwasi Yeboah ended January with a run of three games in double figures for the first time this season with Rutgers (16-5) – also passing 1500 points at collegiate level. The graduate had 17 points to tie a season-high at Iowa before surpassing it with a 20-point haul coming in a 75-72 victory over Nebraska.

Mate Okros had a best of 12 points in 18 minutes in a 71-76 road win for Drexel (12-10), while Micheal Anumba set a new season-high with 11 points for Winthrop (15-7) before matching it in a victory over PC with his side now nine games unbeaten in their conference.

Redshirt sophomore Solomon Iluyomade got up and running for the season, making his first appearance in January and netted a best of six points during a seven-game stretch for the University of Maine (6-15) – also playing 13 minutes in the matchup against Eytle-Rock and Akin.

Zion Tordoff reached double figures for the second time this season with 10 points along with seven rebounds as Marist (5-14) edged out Manhattan 75-73 in overtime for one of four wins in January. Meanwhile, Caleb Fuller had 11 points in a big 101-40 home win for UC Davis (8-14) with Ade Adebayo chiming in with two points, three rebounds, two assists, two blocks and two steals in an all-round cameo.

Robinson Idehen posted nine points to open 2020 in a big win for UC Santa Barbara (13-8) with Tariq Balogun ending the month with his best tally since the opening night with seven points along with four rebounds as Eastern Kentucky (10-12) claimed a 99-86 victory to move to 7-2 in the OVC.

Gedi Juozapaitis showed no signs of slowing down heading into 2020, starting the New Year with a 33-point haul along with nine rebounds and a pair of steals in a dominant 68-90 victory for Flagler College (10-9), earning the PBC Player of the Week award in the process.

The sophomore wing later followed with 35 points to lead his side to a 101-97 home victory with the game-winning three as 27 of his points came in the second half to equal his career high.

Senior guard Danny Evans flourished for Saint Anselm (11-8) in January with a career-high of 26 points coming in a 117-90 triumph over Adelphi. He also added five rebounds and seven assists before following up the performance with back-to-back 22-point hauls – netting a total of 24 threes over a five-game span with 55% accuracy.

Sean Nealon-Lino was inserted into the Fresno Pacific (6-14) starting lineup with instant reward, tying his season-high of 15 points in a six-point loss before adding 11 points in his next outing to help secure the Freshman of the Week award. Jonathan Brown saw his scoring average drop during the month, but finished on a high with 10 points and a season-high seven rebounds at Notre Dame de Namur.

Junior guard Jelani Watson-Gayle extended his scoring streak in double figures to 10 games in January, starting 2020 with 17 and 19 points respectively in consecutive outings in a return to the starting lineup. The former Hoopsfix All-Star Classic MVP later added 19 points again later in the month with Miles (14-3) moving to nine wins from 11 in conference play.

Andre Arissol began the month with a 21-point outing in 49 minutes of action as Chaminade (12-7) went down to a 113-107 loss in quadruple overtime. The senior guard tied a season-high of six assists to go with nine points and eight rebounds in an 18-point win at Hawai’i Pacific before finishing January with 16 points in another victory.

Sophomore guard Sesan Russell was held scoreless for the first time this season before bouncing back with 17 points for Florida Tech (10-10) in a convincing win to spark a run of four straight games back in double figures. Romario Spence started with 14 points and a season-high nine rebounds for his best display of the month with Montevallo (11-8) having also started twice.

Evan Walshe returned to double figures in scoring with 10 points along with five assists – tying his season-high for a fourth time – at home to Tampa before closing out January with a 16-point outing for Barry (14-5) in an 89-80 victory over Lynn.

Adria Amabilino Perez recorded a season-high of 15 points in an 81-78 defeat for Bentley (16-5) to end the month, while Josh Apple pulled down 14 rebounds in a loss for ECU (14-5) though they had another strong month. Freshman Robin Bedford had a season best of seven points as Newberry (11-8) enjoyed a 104-71 success with Callan Low also netting seven points in the win.

Senior Ola Ayodele averaged 6.2 rebounds per game during a nine-game stretch whilst hitting double figures with 11 points as Midwestern State (3-16) suffered seven defeats. Joel Ufele closed out the month with 10 points then eight points for Mercyhurst (11-7), while Sam Van Oostrum tied his season best with eight points in a Franklin Pierce (12-7) win at Southern New Hampshire.