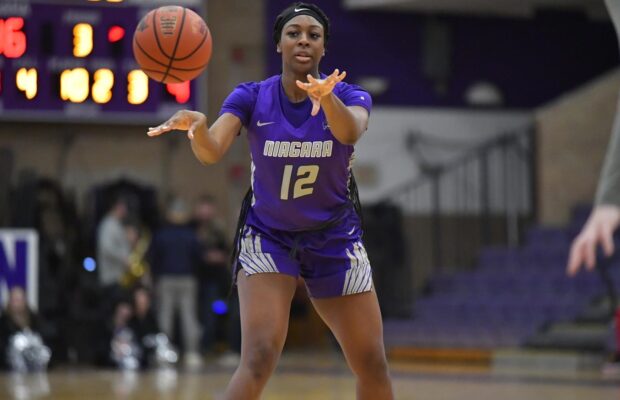 Ahead of a huge few days for Great Britain’s Senior Women, we take a look to the future with the latest recap on the top British talent emerging in US colleges.

Emerald Ekpiteta stepped up for Niagara during January, tying a career-high of 22 points, whilst adding 15 rebounds for a second double-double in a 68-61 overtime success against Sienna. The junior forward then broke her career-high with 26 points on 12-of-17 shooting along with seven rebounds, four assists and three steals to lead her side to a 97-89 victory.

Q3 | Emerald Ekpiteta with a steal and a bucket! #Legacy #MAACHoops pic.twitter.com/s7a7tQilrI

Loren Christie returned to action for University at Buffalo (13-6) with nine points off the bench at Ohio, and later recorded a first career double-double with 14 points and 13 rebounds coming in an agonising 98-93 double overtime loss to Central Michigan.

In contrast, Monique Esbrand enjoyed some late game drama after producing a huge play for Miami (8-11) to seal a 66-64 win over NIU. The junior guard came up with a vital steal and turned it into a game-winning score with 1.8 seconds left to finish with a season-high 13 points and help her team triumph.

Former GB U20 team-mate Gabby Nikitinaite started the month with 16 points against Ohio and followed with 17 points later against the same opponents in a display containing five triples for Northern Illinois (5-13).

Khaleah Edwards hit double figures in four games during the month for Wagner (7-12) including 16 points and six rebounds coming in a 65-79 home loss to Sacred Heart.

Ire Ozzy-Momodu had a strong month, boosting season averages to 8.0 points and 7.3 rebounds per game for Robert Morris University (12-6). The 6’2″ centre started with 13 points and eight rebounds in a win against Edwards’ Wagner and went on to set a career-high in rebounds with 17 to go with 17 points for a stellar double-double in beating Merrimack 72-50.

Freshman guard Holly Winterburn began January with eight points in 16 minutes against Colorado and also had seven points over Utah as Oregon (18-2) continued their impressive start.

Hannah Jump is also helping Stanford (19-2) maintain their dominant record, knocking down another five triples in a 17-point haul against Washington with a further 14 points also coming against Utah.

There was a season-high of 16 points for Jenelle Grant in a 61-56 loss at Northwestern in just her second start on the season, before adding 11 points in the next outing as Purdue (15-7) overcame Illinois in a 14-point home win.

Evelyn Adebayo recorded season-highs of six rebounds in consecutive games as well as five points without a miss in five minutes of an 80-50 win over Cincinnati for UConn (19-1). Meanwhile, Emily Stradling also set a rebounding high with seven for Mercer (4-17), and Precious Adediran scored five points on two occasions through January for Chicago State University (1-19).

Charlotte Ellmore carried on from where she left off in 2019 with West Florida (6-15), matching a college career-high of 21 points in a 63-59 triumph. The Essex native added scores of 19 and 17 points in the next two games before finishing January with another 17-point haul to average 10.0 points per game on the season. Loie Webb had back-to-back games in double figures for the first time this season at Lynn (11-9), starting with 14 points in a win over Saint Leo, while Dani Lozzi finished with 13 points and seven rebounds in her best display of the month.

Webb also netted seven points in a 77-74 victory over Barry (5-13) with Harriet Swindells scoring 14 points in defeat, while fellow starter Ashleigh Pink had 11 points for the third time in the month. Swindells had earlier come close to a new career-high after pouring in a game-high 27 points in a tough 66-70 home loss.

Senior guard Gina Brierley had a double-double of 16 points and 13 rebounds in the loss against Lynn for Saint Leo (9-11). Another double-double followed later in the month, which also started a run of three consecutive games with double figure points tallies to close out January.

Maya Price collected a new career-high with 14 rebounds for Eckerd (13-5) before posting a first career double-double with a best of 21 points along with 11 rebounds in a crushing 102-53 win. Sarah Round also flourished in January with five scores in double figures including a 16-point haul in an 84-55 win for Goldey-Beacom (4-14).

Rebecca Morrsion produced a strong finish to January having had nine points and 12 rebounds before a return to the starting lineup. The Scottish forward had a run of three straight games in double figures in points including a double-double of 16 points and 12 rebounds to earn the Central Atlantic Collegiate Conference Rookie of the Week award – for the second time.

Fellow freshman and team-mate Imogen Cook had a month in and out of the starting lineup, but still found ways to contribute. An outing of 10 points and five rebounds at Concordia set personal bests in both categories before Cook closed out the month with a 12-point haul off the bench in a 75-53 win for Caldwell (5-15).

Cheyenne Scott began 2020 with a best of 18 points with four assists in a tough loss for Florida Tech (9-11) before earning a spot in the starting lineup. Shawnisay Millar matched her season-high with 15 points for Midwestern State (7-10) as they went on a three-game slide twice.

Jessica Eadsforth-Yates started the New Year in style with a season-high 17 points as well as six rebounds and four assists for Davis & Elkins (6-13) before adding further hauls of 15 and 14 points, respectively later in the month.

Freshman guard Macy Spinks hit a best of 13 points in the month in a 73-60 loss for Saint Anselm (14-4) before they embarked on a five-game winning run to close out January.

Megan Haines tallied a season-high of eight assists along with six points in a 53-65 win for Charleston (15-4) at Davis & Elkins and finished the month reaching double figures for the first time in January with 10 points against Frostburg.

Regular starter at Point Loma (12-7), Alix Henderson netted a new best with 14 points to go alongside six rebounds and five assists in a 94-83 home win. Chandera Jones reached double figures for the first time for Millersville (7-12) with 11 points against East Stroudsburg.

Freya Cooney‘s best return in January came in an eight-point display in defeat for Franklin Pierce (9-10), while Megan Sheret scored a season-high of six points to go with four rebounds for Fresno Pacific (10-10) in a convincing 74-46 home win.

Dami Adeyinka matched her season-high for Quincy (6-13) with 12 points in a 78-72 home win before reaching double figures in successive games with 10 points against Truman along with four assists. Meanwhile, Jade Blackburn registered four points in back-to-back games to end the month including hitting double figures in court time for the first time at Sioux Falls (19-3).