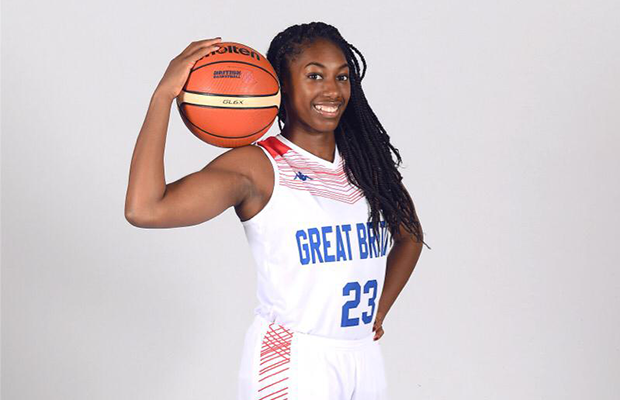 Great Britain Senior Women’s international Melita Emanuel-Carr is to host a charity All-Star game and fundraiser, in aid of helping to break the cycles of youth violence.

‘Stop the Violence’, happening at Moberly Sports Centre in North West London on Saturday 27 July from 2pm until 6pm, brings together the basketball community and aims to raise awareness of what Emanuel-Carr refers to as a violence epidemic in the capital.

Carr, who played in Spain’s Liga Dia last season with CB Bembibre and was part of England’s Silver-medal winning Commonwealth Games squad, is also the Sports Ambassador for Westminster and a part of their Champions of the Future scheme.

All money raised will go to local charity Red Thread, who have a youth violence intervention programme which funds their youth workers to meet young victims of violence and aims to disrupt the cycles of escalating violence within communities.

DONT MISS OUT!! Link to get tickets are in my bio In memory of @swaggye29 and other people who have lost their lives due to youth crime! #basketball #stoptheviolence #youthcrimeprevention #london #dontmissout #moberlysportcentre

The day will begin with a celebrity game, featuring some of the hosts of BkChat London, other sporting stars, along with legends of the game including Ros Mason, Julius Joseph, and Junior Williams.

Melita has used her connections to put together stacked rosters for the All-Star game (full rosters below), including two-time BBL MVP Justin Robinson, his BBL rival Matthew Bryan-Amaning, along with a number of other BBL players and Brits who normally ply their trade abroad.

“Basketball means the world to me,” Emanuel-Carr said. “It is my job and my hobby and I am very fortunate to have a great career so far. I am at a point in my career where I want to help basketball as much as I can, especially in London where it needs the support as it is not on the top of sport England like other sports.

“When I was younger I made basketball my life, and I believe that by sharing my passion with other young people it can help to disengage people from the cruel street life. I know many people whose lives have been saved from basketball and I aim to help save more!”

Tickets are £2.50 for Under-16s and £5 for Over-16s, whilst kids under 10 get in free. For more information and tickets, click here. If you are unavailable to attend but would still like to support, you can donate here.