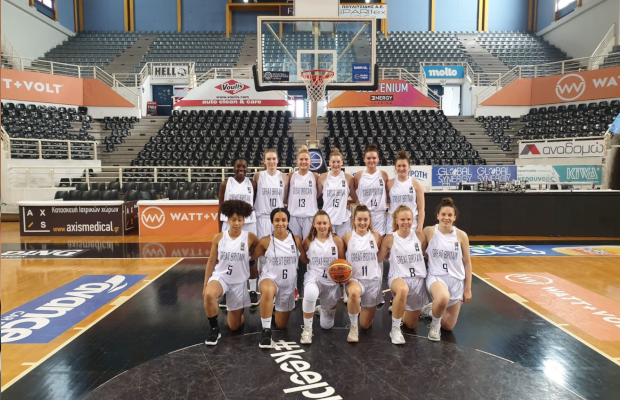 Great Britain’s Under-18 Women continued their preparation for the upcoming European Championships with two friendlies in Greece.

Len Busch’s side took to the court for the first time – following camp in Manchester – going down to the hosts 66-33 in the opener before a 67-47 defeat followed in the second game, on Tuesday.

Greece and ⁦@gbbasketball⁩ u18W together after a good second prep game. GB on the short end 67-47, but a much improved performance from yesterday. Keep getting better. ⁦@bballengland⁩ ⁦@basketballscot⁩ ⁦@BasketballWales⁩ pic.twitter.com/yT2RzkQNmZ

“The first game was pretty normal for a team’s first competitive game against a good experienced team that had already played several prep games,” said Busch. “We were much better the second game, leading at times in the first half.

“We played all 12 players significant minutes both games and are very happy with the improvement into the second game.

“We will be better again when we hit the floor for our first game in Macedonia.”

The opening game saw GB off to a slow start as they trailed 25-9 at the end of the first quarter, but rallied with Alex Baker and Rebeccah Adjeiwaah Dwomoh scoring six points apiece.

A brighter start in Thessaloniki saw GB stay with their opponents in a competitive first half before Greece eventually broke away, sparked by a buzzer-beating three at the end of the third to lead by nine.

GB travel to Skopje, North Macedonia for their Division B campaign at the European Championships with a tournament opener against the Netherlands on Friday with Sweden, Ukraine, Albania and Luxembourg to follow in the group phase.