Vanderwal, Handy On a High, But GB Not Done Yet - Hoopsfix.com

Support
Home / National Teams / Vanderwal, Handy On a High, But GB Not Done Yet

Vanderwal, Handy On a High, But GB Not Done Yet 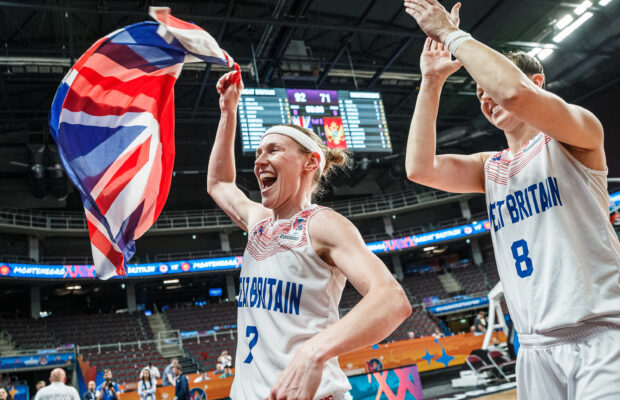 Great Britain’s Senior Women will play in a FIBA Women’s EuroBasket quarter-final for the first time on Thursday and the history-makers are not ready to stop there.

Riga onto Belgrade as Hungary await Chema Buceta’s side with victory not only guaranteeing a chance to play for a medal, but it would also ensure GB head to the 2020 Olympic Qualifying tournament.

The #EuroBasketWomen Quarter-Finals field is complete ✅.

Jubilant scenes followed Monday’s 92-71 victory over Montenegro (REPORT here) as they finally broke into the top eight of a major tournament – to the obvious delight of capped centurion duo Chantelle Handy and Rachael Vanderwal.

“It’s unbelievable,” said Handy, post-game. “We’ve worked so hard over the years to get here, to get the respect and we are proving a few people wrong.

“We’re not finished yet, though. Going into the top eight, it’s going to get harder so our focus has to be stronger.

“The chemistry on this team is great, everyone is locked in and we have the same goal.”

Vanderwal beamed: “We’re going to the quarter-finals, this is amazing. We can only stop ourselves, it is up to us now, Hungary next – we’ll be going into that game fully confident that we can win.”

Temi Fagbenle and Karlie Samuelson combined for an impressive 57 points in the historic triumph to lead from the front as part of an incredible team effort with the defence continuing to stand firm.

“We have so many weapons on any given day,” added Handy. “We rely and trust each other and the key is to keep working and keep developing.

“We’ve prided ourselves on defence. We know the offence will come.

“We know we’re smaller than some teams so we just have to be aggressive. It was do-or-die [against Montenegro] and everyone stepped up and gave everything.”

The group could not be any closer and they are lifting each other to new heights with the confidence to express themselves on the court. And, Vanderwal gave credit to Coach Buceta for helping bring that together.

“We have great chemistry out there, there’s full trust in everyone. We feel confident and we’re playing with freedom and that’s down to Chema and the trust he puts in us.”

The belief is there. The talent is there. And even more history is within reach.

GB will either be playing France or Belgium in the semi-finals or in the 5-8 Classification round for a shot at Tokyo – the top six advance to the Olympic Qualifying tournament.