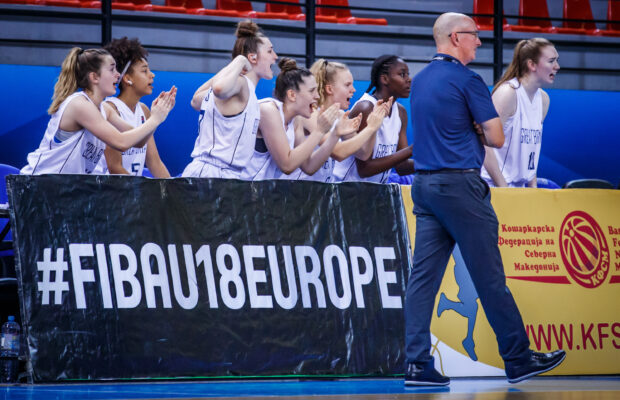 Great Britain Under-18s picked up their second win at the European Championships with a 57-54 victory over hosts North Macedonia, in Skopje, on Friday night.

Len Busch’s side went 1-4 in the group phase to drop into the 17-23 Classification Round, but held their nerve down the stretch to edge out the home side.

GB conceded a 3-pointer on the opening possession before responding with the next 15 points over a six-minute spell to take control with five points from Taylor-Willis.

North Macedonia ended a long drought with another three before hitting another following an instant reply from Asha Andrews as GB led 18-9 after 10 minutes. Ashton fired in from downtown to start the second, though from 25-11 up, GB would slowly see their advantage cut down with their opponents closing in with a 13-1 run.

Dwomoh scored five successive points to ensure GB had the lead at the half as they went into the break 31-28 ahead, but also lost Ashton to injury in the final minute. Back-to-back threes as part of an 8-0 start to the third saw GB go behind before recovering with Mbam hitting two triples in a 12-0 run of their own.

The gap would be just two points at 45-43 entering the fourth and a tense finish played out. Taylor-Willis scored the first field goal of the final quarter with 6:42 left before Macedonia went on to take the lead with a 5-0 burst to make it 50-52.

Alex Baker, and then Amelia Sandie – with a big steal and coast-to-coast drive – would ensure GB were level at 54-54 before Dwomoh came up with a clutch score with 29.0 seconds left on the clock.

The defence held on with Little grabbing important rebounds at both ends to see out the victory.

Much needed win for the team, which continues to work together to get better. Good team effort. 10 players scoring, 12 players in the game. https://t.co/MuSxxWCtBr

GB next face Austria tonight in the 17-20 Classification at 8pm UK time with victory meaning that will face the winner of Group E – either Bulgaria or Norway – for 17th place on Sunday.