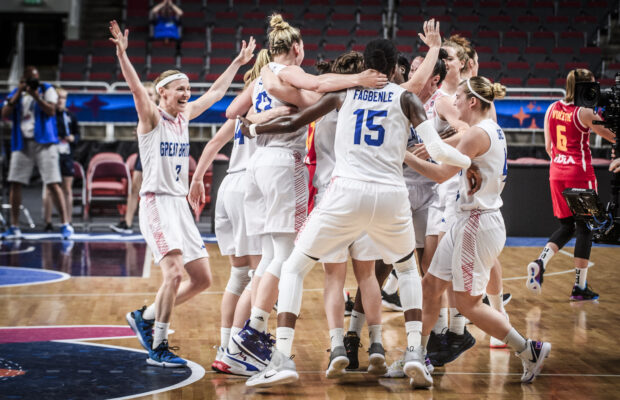 Great Britain’s Senior Women made history by reaching their first-ever quarter-final at a FIBA Women’s EuroBasket after beating Montenegro 92-71, in Riga, on Monday.

Chema Buceta’s side will now move onto Belgrade in Serbia to take on Hungary in the quarter-final on Thursday, and now guaranteed to have a shot at making the top six for the 2020 Olympic qualifying tournament.

Temi Fagbenle managed to better her showing in the win against Ukraine with a phenomenal 29-point haul to lead the way. Karlie Samuelson hit big shots throughout for 28 points on 72% shooting with Rachael Vanderwal and Jo Leedham also in double figures with 15 and 13 points, respectively.

GB took control early on with a 7-0 burst in just under a minute, including five straight from Samuelson. It was Fagbenle who opened the scoring and the Minnesota Lynx centre racked up nine more points in the quarter, showing off the mid-range game including one off a nice fake.

A 22-14 first quarter lead, however, was almost immediately wiped out at the start of the second as Montenegro found their range from downtown and soon took their first lead at 26-27. Fagbenle answered, from mid-range once more and Vanderwal scored five points to maintain the advantage.

Jelena Skerovic’s side kept in the contest with their 6 of 11 shooting from outside and only trailed 44-41 at the half after a strong defensive start from GB.

An 8-1 opening to the third pushed the lead out to double figures with Fagbenle moving beyond 20 points off a beautiful assist from Vanderwal. The Canadian native was in an inspired mood and knocked down another triple to take her own tally into double digits.

Samuelson continued her shooting streak with GB taking control with a 65-52 advantage during the third period. Once again, they were pegged back and Montenegro cut the deficit to just six points early in the fourth.

From there, GB’s response was magnificent. Fagbenle proving too strong, Cheridene Green going to work under the basket, Vanderwal’s relentless drives to the basket and Samuelson still hitting big shots along with a determined collective effort on defence.

All part of a momentous 23-6 spell that booked their ticket into the last eight for the first time.

Now, loftier ambitions. One win from competing for a medal. But whatever happens in Belgrade, history was made and a fantastic achievement.

Related ItemsEuroBasket WomenEuroBasket Women 2019FeaturedGreat Britain Senior Womenwomen
← Previous Story Hannah Shaw believes best is yet to come for GB
Next Story → Vanderwal, Handy On a High, But GB Not Done Yet