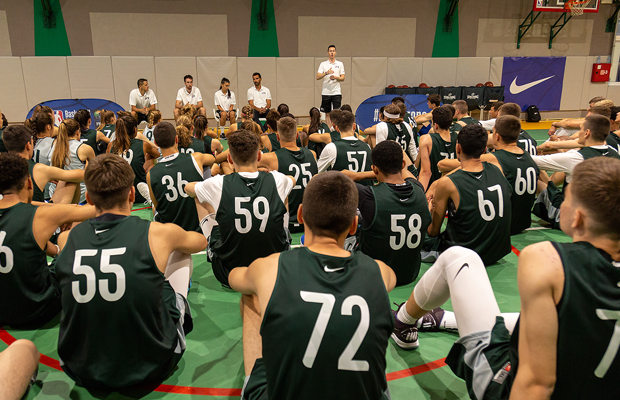 The UK will have three representatives at the annual NBA and FIBA Basketball Without Borders Europe Camp, featuring 64 of the top male and female players ages 17 and under from 26 European countries who will travel to Riga, Latvia for the camp from Sunday June 9-12 at the Elektrum Olympic Center.

Barcelona’s Matt Marsh, along with Myerscough’s Amari Williams and Lewisham Thunder’s Josh Uduje – who both played in the Hoopsfix All-Star Classic this past weekend – have all been selected for the 18th annual camp, part of the NBA and FIBA’s global basketball development and community outreach program. No female representatives from Great Britain were selected.

BWB Europe 2019 will bring together the top male and female players aged 17 and under from throughout Europe to learn directly from current and former NBA and FIBA players and coaches and to compete against the best young players from the region.

Players and coaches will lead the campers through a variety of activities on and off the court, including movement efficiency, skill development stations, shooting and skills competitions, 5-on-5 games, and daily life skills seminars focusing on health, leadership and communication. One boy and one girl will be named BWB Europe MVPs at the conclusion of the camp. In addition, NBA Referee Performance and Development Advisor and longtime former NBA official Bernie Fryer will lead various development sessions with local FIBA referees.

NIKE, a global partner of BWB since 2002, will outfit the campers and coaches with NIKE apparel and footwear.

The NBA and FIBA have staged 57 BWB camps in 36 cities in 28 countries on six continents. More than 290 different current and former NBA and WNBA players have joined more than 230 NBA team personnel from all 30 NBA teams with 60 BWB campers drafted into the NBA or signed as free agents.

Last year Kareem Queeley and Mate Okros were selected as the UK representatives of the camp.