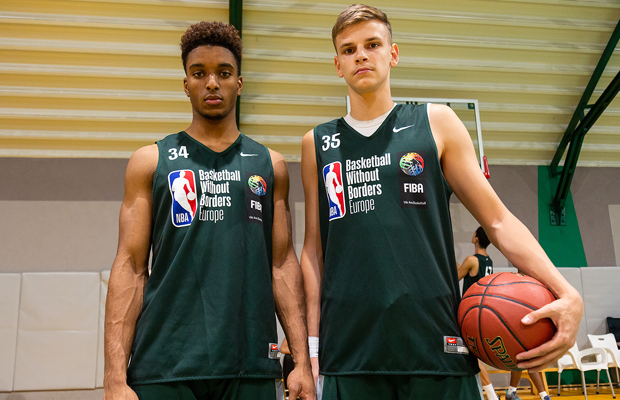 Great Britain Under-18s Kareem Queeley and Mate Okros have been selected to play at the prestigious Basketball Without Borders Europe Camp (BWB) at Zarkovo Sports Hall in Belgrade, Serbia from August 15-18.

The camp, a collaboration between the NBA and FIBA, brings together the top male and female players ages 17 and under from throughout Europe to learn directly from NBA and FIBA players, legends and coaches and to compete against the best young players from the region.

Both Queeley, who plays for Real Madrid, and Okros, who plays for Myerscough, are a fresh of a European Championship campaign with GB that saw them retain their Division A status, finishing 7th.

“I was very excited when I found out I had been selected because it’s a great opportunity to come out to Serbia and play with the top European basketball players,” Queeley said, talking from the camp in Serbia.

“I was ready to come out to the camp and compete, I know a couple of the guys already having played against them at national and club level so it was exciting when I heard the news.

“I really enjoy taking in the little details that the coaches have explained to us that you wouldn’t look at on a regular basis, as they can make a really big difference. It’s really good to have guys that have been there and done it coaching you as they know what they are talking about.

“I was speaking to Gary Harris of the Denver Nuggets and he was pointing out where I should be off the ball and what positions you can take up to create an advantage and it was really good to hear it from him as he’s at the highest level in the NBA right now. Coach Gregg Popovich as well, he’s a champion, a great coach and he knows how to win multiple NBA Championships so it’s good to have the presence of a guy who knows how to win.”

BWB Europe 2018 will also include NBA Cares community outreach efforts with youth in Belgrade, including packing and delivering care packages to young people dealing with illnesses. Nike, a BWB global partner since 2002, will outfit the campers and coaches with Nike apparel and footwear.

BWB has reached more than 3,200 participants from 127 countries and territories since 2001, with more than 55 former campers drafted into the NBA or signed as free agents. A record 24 former BWB campers were on opening-night rosters for the 2017-18 season, including Milos Teodosic (LA Clippers; Serbia; BWB Europe 2001).