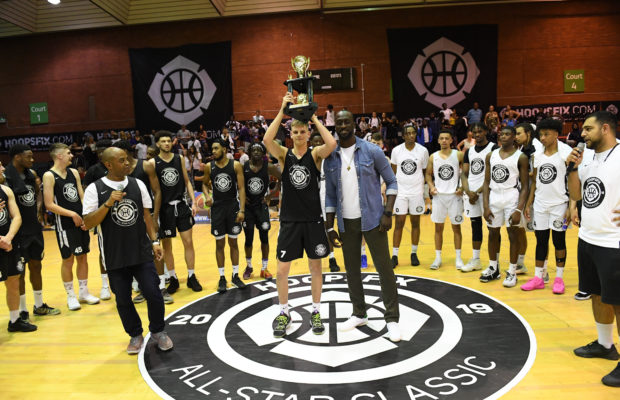 Team Black recorded a 67-62 victory over Team White in the 2019 Hoopsfix All-Star Classic Class of 2019 game, in Brixton, on Sunday.

Mate Okros led his side to the win as the MVP with 16 points along with four rebounds and three steals. Hosana Kitenge posted 11 points to go with eight boards and three blocks with Wes Oba hitting 10 points from the bench.

“It’s a great honour to be MVP and just to have the opportunity to be selected and show out in front of a great crowd,” said Okros.

“I feel like our team were up against it with a couple of guys out, but we stepped up and managed to get the win.

“It’s a great feeling to get the win in one of my last games on home soil, going up against long-term friends and team-mates.

“Winning the MVP award gives me more motivation. I want to keep getting better and have more achievements.”

In defeat, Niall Harris led Team White with 15 points as well as four assists with Joe Bielak also in double figures with 10 points.

Kitenge started the game with an and-1, but it proved a tough opening for Team Black as they were held to 25% shooting over the opening period. In contrast, Team White were up at nearly 60% with Bielak scoring his five points in a 7-0 run to set the platform as they built a 12-20 lead after 10 minutes.

However, Steve Hansell’s side hit back with an 11-0 start to the second to take the lead behind five more points from Kitenge. A tight period followed with baskets hard to come by for both sides and the gap would be three points with Team Black in the ascendancy.

Team White surged ahead early in the third, but a three from Okros kept his side close behind and the two teams would head into the crucial final quarter tied at 51.

The game was still level at 56-56 with less than seven minutes remaining, but another Okros three helped Team Black pull away down the stretch and they were able to close out the victory.