GB Push Spain All the Way in Another Close Defeat - Hoopsfix.com

GB Push Spain All the Way in Another Close Defeat 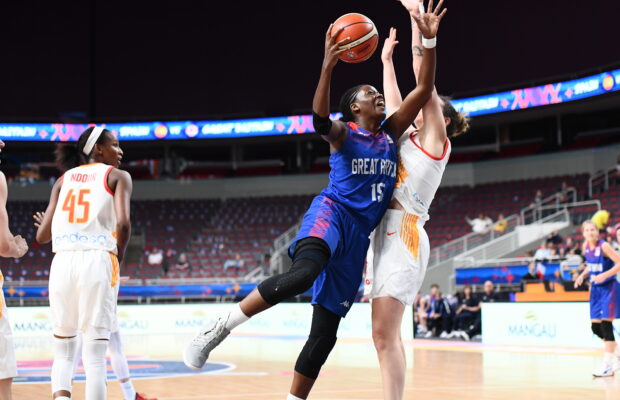 Great Britain’s Senior Women ensured last week’s friendly performance against Spain was no fluke as they give the reigning champions another stern test before falling to a 67-59 loss, in Riga, on Saturday evening.

Chema Buceta’s side showed tremendous fight throughout the contest and the win was there for the taking, though they drop to 1-1 at FIBA Women’s EuroBasket 2019 ahead of Sunday’s encounter with Ukraine.

Temi Fagbenle went to work in the paint against the Spanish bigs and finished with 20 points on 10 of 15 shooting, while Karlie Samuelson and Jo Leedham had nine points apiece.

Leedham pulled up for three to check if yesterday’s magic was still in the system, but it was off the mark to maybe signal that tougher times ahead.

Handy did hit from long range as neither side settled in the early stages with Spain finding their success inside with Astou Ndour amassing eight points in the opening quarter.

However, careless turnovers from Spain – five in total – limited their offence with GB’s defence taking credit for that, too. Georgia Jones fired in a three with the two teams soon tied at 14-14 to bring the first quarter to a close.

Points were hard to come by with defences standing firm. In a game of few easy scoring chances, a mini 4-0 burst from GB forced Lucas Mondelo into a timeout to halt the charge.

Samuelson displayed incredible athleticism with a falling mid-range jumper and it helped ensure GB would go into the half-time break with a deserved advantage. A late putback cut the lead to 34-31, but most notably both of those totals included a combined zero points for the day one stars in Leedham and Marta Xargay.

Handy hit another three when play resumed and GB maintained their advantage through further inside scores from Fagbenle and Cheridene Green. Ndour was a constant scoring threat and combined with Laura Nicholls as the duo inspired an 8-0 close to the quarter, capped by a Silvia Dominguez three at the buzzer to make it 48-43.

Samuelson’s triple trimmed the deficit to two before seemingly straight-forward opportunities were spurned. At the other end, Spain began making the difficult look easy and all of a sudden the gap was soon at 11 points. Comfortably the largest for any side in the game.

GB had worked hard to stay in contention and refused to lie down, a true testament of the spirt of the group. Leedham’s first basket came from outside and began to take over to almost single-handedly wipe out the deficit. Tied game.

1:57 remaining and the response from the champions was somewhat inevitable. Just as they did in Fuenlabrada last week, Spain hit big shots down the stretch – the first of which was from Cristina Ouvina making her first three of the night.

An 8-0 run had ensued and that was the game. The final eight-point margin flattered Spain with GB now heading into the rest day against Ukraine – victory sends them through in second, though a heavy loss could mark the end of their tournament at the first hurdle.