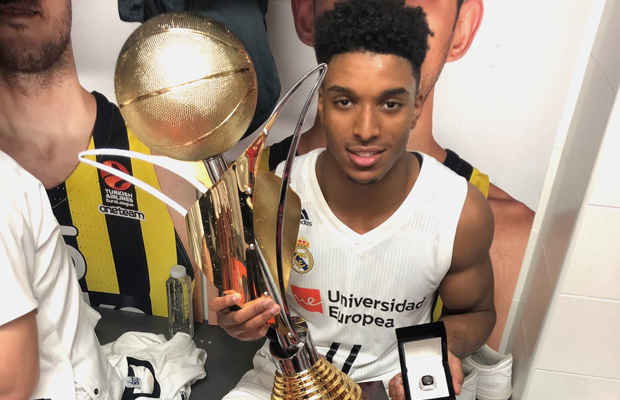 Great Britain Under-18 Kareem Queeley has won the Euroleague Adidas Next Generation Tournament with Real Madrid, who went undefeated through the competition.

It is believed he becomes the first Brit to win the junior European crown, as his side dominated Mega Bemax Belgrade on Sunday 95-76 in the championship game in Vitoria-Gasteiz, Spain.

“It is a great feeling,” Queeley told Hoopsfix. “Our team has put in a lot of hard work throughout the whole season to put ourselves in the position of being the best team in Europe, so it’s great to see that our hard work has paid off.

“Our team was solid all through the tournament, from start to finish. We demonstrated that we are a very tough team to beat.”

The 2001 born athletic guard averaged 8.9 points, 3.6 rebounds, 3.3 assists and a steal per game in 20 minutes per outing for Real Madrid through their 8 games in the competition, where no team would get closer than 15 points to them.

Reflecting on his own individual performance he said:

“I feel that I had a really good tournament overall. I demonstrated that I can play basketball at a high level in Europe and that I am one of the best in my generation.”

Having signed with Real Madrid as a 13 year old, Queeley’s contract is up this summer as he considers his options, and though he has the option to go to college in the US, it is looking likely he will choose to stay in Europe.

“My plans for next season have not yet been confirmed, looking to staying in Spain or Europe,” he concluded.

Watch the championship game back in full here: