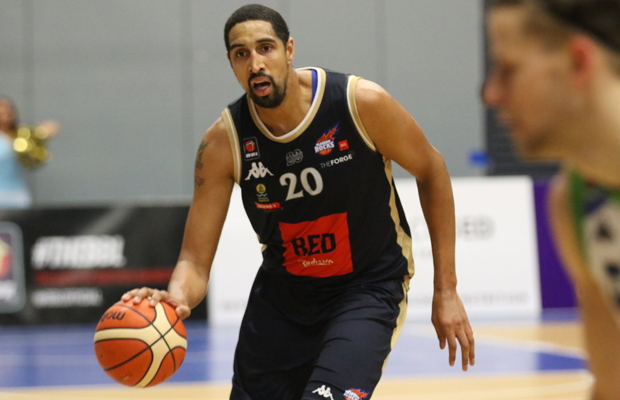 With league-leaders Lion Londons not in action, it gave other teams a chance to gain some ground.

A back and forth encounter saw the Raiders swing momentum in their favour late in the third before the game was level at 78-78 late on. Josh Wilcher hit a big three and was followed by another from Devontavius Payne and the Raiders were able to ice the game from the line.

Rashad Hassan posted a double-double with 22 points and 12 rebounds with Wilcher and Donte Nicholas each adding 21 points and 7 assists apiece in the win.

Kyle Williams led Newcastle with 23, whilst Darius Defoe had 22, and Rahmon Fletcher 18 and 8 assists.

The Riders seemed to be in control at the half with a 14-point lead before the Flyers battled back in the third to take the lead. It went down to the wire and a free throw from Conner Washington proved decisive, despite Bristol having chances to snatch the win.

DeAndre Burnett had all of his team-high 14 points in the first half, while Kiefer Douse stepped up in the second and finished with 13 points along with 6 rebounds and 6 assists with JR Holder nearing a double-double with 10 points and nine boards.

Fred Thomas led Bristol with 20, whilst Justin Gray had 14 and Daniel Edozie 13.

Rob Paternostro’s side improve to 9-3 as they climb into third, while it’s a fourth straight loss for the Flyers, who now drop to 7-5.

After a back and forth opening five minutes, a 15-6 run to close out the first quarter put the hosts firmly in control of the contest.

Chris Alexander and Dirk Williams combined for 64 points with 32 each, both shooting an efficient 64% from the floor. Williams also added 6 rebounds, 5 assists and 3 steals to finish with an index rating of 44.

The Wolves remain rooted to the foot of the table having only managed one win in 15 outings.

The Giants proved to have the most staying power, dominating overtime 17-9 in what was an incredibly close contest for much of the game.

Ingus Bankevics proved a real spark off the bench, scoring a game-high 22 points. Willie Clayton and Vlatko Granic also impressed for Manchester, both contributing double-doubles, with 19 points and 18 rebounds and 18 points and 10 rebounds respectively.

The result sees Manchester improve their record improve to 7-7.

Royals used a big fourth quarter run for the second home game in a row, and remain unbeaten at Crystal Palace in league action at 5-0.

The teams could hardly be separated for much of the game and Sharks led in the fourth quarter until Matthew Bryan-Amaning sparked a 16-2 run, in which Ashley Hamilton also scored seven points before a Will Neighbour score capped it for a double-digit lead at 77-64 inside the last two minutes, as the visitors were scoreless for four minutes.

Matthew Bryan-Amaning led his team at both ends of the floor, finishing with 22 points on 57% shooting to go with 7 rebounds and 3 assists; while adding a huge 5 blocks and 2 steals at the defensive end.

Ashley Hamilton added 18, whilst Will Neighbour finished with 17 for Royals.

We caught up with @KieronAchara after Rocks' @BBLofficial Cup semi-final victory against Manchester Giants.

You can buy your tickets for the BBL Cup Final + travel in Birmingham on the 27th of January now at: https://t.co/PzenSFdesA pic.twitter.com/NGAez7sjbb

The Rocks led by eight ahead of the Second Leg and produced a clinical display at home to set a showdown with London Lions, at Arena Birmingham on Sunday 27 January.

The Rocks started strong with a 10-2 start and when they established a double-digit advantage in the second period, they never looked back. Manchester rallied late on to close within single figures before Glasgow sealed the win in style.

Kieron Achara led the way for the Rocks with a game-high 22 points on 70% shooting along with 8 rebounds, 3 steals and 2 blocks, while there was plenty of support with four other players in double figures, including Bouna Ndiaye’s 17 and 16 from Ali Fraser.

Willie Clayton had 18 points but was limited to just 5 rebounds, Mike McCall had 15 and James Jones 13 for Manchester.

🏀 It was an absolute nail biter, but your Eagles take it in overtime to get back to winning ways. #BritishBasketball #LetsGoEagles pic.twitter.com/1Wf5fPCwjT

The Scorchers opened up their biggest lead of the game at 38-30, but the visitors hit back to go in level at the half. Drew Lasker put the Eagles ahead inside the final minute only for Elechi to fire a three at the buzzer for an extra period that the visitors eventually triumphed in.

Jeremy Smith stepped up for the Eagles after Fletcher fouled out, while Victor Moses missed the game through injury, and finished with 31 points along with nine rebounds and five assists. Kai Williams and Kyle Williams added a further 31 combined with five triples.

The Eagles bounced back from Friday’s defeat in their new arena to earn a 10th league win this season.

Surrey gave up 24 turnovers in the contest and shot 55% from the foul line as they missed the chance to claim a big scalp at home and drop to 3-13.

BIG WIN for Nix 89-84 against @officialraiders as Nix fight hard down the stretch! 🏀

We are back at EPSV on Sunday 3rd February when we host @rocksglasgow! Support was amazing tonight! See you back here on the 3rd! #NixNation #BritishBasketball pic.twitter.com/Gy5pGJloVN

Down by 10 after the opening 10 minutes, the home side hit back with an emphatic second quarter to move ahead. However, they were level ahead of the fourth, but back-to-back threes late on from Momcilo Latinovic and Hayes proved decisive.

Five players reached double figures for the Nix, led by Hayes with 19 points as they managed to cancel out Hassan’s double-double of 23 points and 14 rebounds.

Ben Thomas’ side claim the head-to-head and close the gap on the top eight as they improve to 7-9, while Plymouth are now at 8-8.