Newcastle Eagles’ new 3,000 seat capacity arena prepares for its official opening on Friday night, welcomed by a sell out crowd for their match-up with Plymouth Raiders.

The build, which officially started at the end of 2017, is the culmination of over a decade of dreaming by Newcastle Eagles’ owner Paul Blake, finally giving the club control of their own venue, complete with cafe, bar, corporate and training facilities.

“It’s been a goal of mine for at least ten years, probably longer,” Blake told the Chronicle Live. “In reality, you never expect it to happen because it’s a difficult thing to do.

“We can now really engage the corporate side of the business properly and it’s been the missing piece in a lot of respects. There should be a more settled training schedule with a gym on site, all the video opportunity you could ever want in-house. We’ve got huge great screens on courtside for using video whilst the guys are training.

“It should all really help us to keep pushing the envelope.”

The arena will be open for 362 days a year and stage up to 40 events annually – including a minimum of 22 Eagles’ fixtures.

The venue will be open from 8am-10pm daily and embrace a wide range of sports clubs, organisations, age groups and abilities – becoming a focal point for leisure and recreation in the West End of Newcastle; including netball, volleyball, badminton, wheelchair sport, boxing, martial arts, dance groups, table tennis, spinning classes and yoga but also dinners, book clubs, sewing clubs, an over-55 club, and educational and pastoral activities.

With 2800 seats, a further 200 floor seats can be provided to take the capacity to 3,000, raising the question of how long it will be before we see Newcastle Eagles join their Leicester counterparts in European competition. Blake says, they need time to get used to the venue.
“We’re looking at a 12-month financial cycle to learn and understand what we have here and the costs but there are new opportunities we haven’t had before,” he added.

“We all need to be a bit patient because we don’t want to break ourselves trying to reach a goal quicker than we need to.” 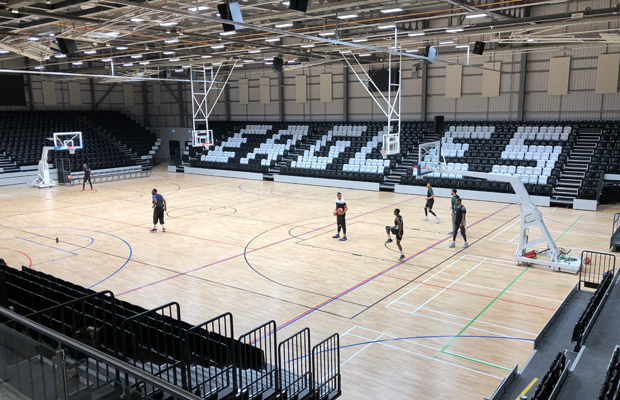