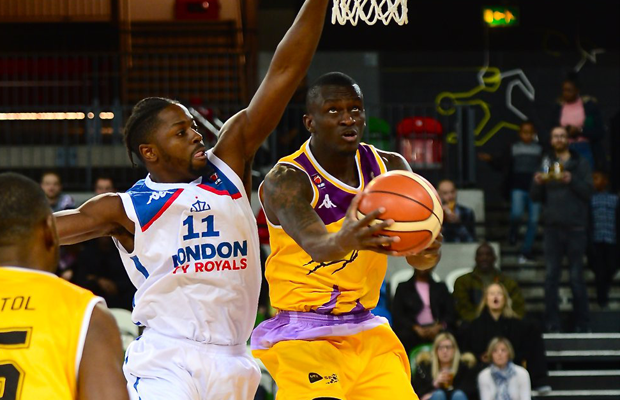 An eight game slate in the BBL saw a number of big results, none bigger than London Lions winning the ‘battle of London’ against their local rivals, London City Royals, and then defeating Sheffield in overtime in a top of the table clash on Sunday.

With the win Sheffield remained the league’s most in-form team having bounced back from a 1-3 start to the season, whereas Newcastle find themselves trending in the opposite direction – the result extending the Eagles’ losing run to three games.

The Sharks came out of the blocks with real purpose, netting an impress 28 points in the opening quarter. The home side amassed an eight point advantage over the first 10 minutes, allowing them to control the game’s tempo over the remaining three periods.

Chris Alexander netted a game-high 23 points for Sheffield, while Marsden poured in 16 points and added 10 rebounds. The pair set the tone early, scoring a combined 29 points before the half-time break. Anthony Collins also impressed with a game-high 11 assists, as did Dirk Williams with 13 points and 11 rebounds.

BBL Championship
London Lions made a statement with a derby victory over rival capital side London City Royals, at the Copper Box.

There was little between the teams through three quarters in an evenly contested battle, but Jordan Spencer’s three before the end of the third put the Lions up five and they used that momentum to pull away in the final quarter with a 14-0 close.

The Royals were held to just six points in the fourth period as their hopes of another big scalp came to an end with their overall shooting at 33% on the night.

Ladarius Tabb posted a derby double-double by half-time and finished with 23 points and 17 boards, while back-court duo Justin Robinson (17) and Spencer (17) shared 34 points in the win.

Matthew Bryan-Amaning had 12 points, and Ashley Hamilton 11, as they were held to a combined 6-of-17 shooting.

BBL Championship
Cheshire Phoenix returned to winning ways as they overcame Worcester Wolves on the road for their first victory since October.

Safe trip home to the team and travelling fans!

Momcilo Latinovic fired in a BBL career-high of 35 points on 11-of-19 scoring to lead his side to victory, as they handed Worcester their 11th straight defeat.

Daniel Norl battled for 16 points in a full 40-minute effort and CJ Gettys hauled down 15 rebounds to go with 13 points.

The game went all the way to the wire with ten fourth quarter lead changes. A long three from Ingus Bankevics put Giants ahead with eight seconds to go only for Jalan McCloud to tie the game and look like he had forced overtime. With four seconds to make the final play, Bankevics was there again to bank a long three-pointer right on the buzzer and take the victory.

In a consummate team performance from Giants, six players were in double-figures. As well as Bankevics’ late heroics, they were led by 21 points and six assists from Mike McCall Jr, while Willie Clayton had his customary double-double of 18 points and 20 rebounds. Callum Jones added 16 and 6 assists.

Justin Gray had 21 to lead Bristol, with Jalan McCloud adding 19 and Tevin Falzon 15 points and 13 rebounds.

BBL Championship
Plymouth Raiders picked up another home win as they defeated London City Royals 84-77 to leapfrog the visitors in the table.

Neither side had control in an evenly contested first half, but threes from Joonas Jarvelainen and Declan Soukup gave the Raiders momentum to take into the final period and they soon led by 12. However, the Royals battled back to level late on before Josh Wilcher’s triple was decisive in a 7-0 close.

Jarvelainen fired in 24 points for the Raiders with Donte Nicholas adding 19 points along with 15 rebounds, 5assists and 4 steals for another all-round display.

Ashley Hamilton led Royals with 16, whilst Orlan Jackman added 12 and Will Ohuaregbe 11.

Paul James’ side move to .500 at 6-6 with the Royals now with the same win percentage as they dropped to 5-5 in their debut campaign.

BBL Championship
London Lions extended their lead at the top of the BBL Championship after outlasting DBL Sharks Sheffield 92-82 in an overtime thriller.

The Lions made another statement as they completed a double-winning weekend at home to move to 11-2 as they end the Sharks’ eight-game win streak in the league.

London recovered from a slow start to move ahead in the fourth, but the hot shooting of Dirk Williams – who was spectacular in the second half – kept the Sharks in contention and his late three forced overtime. However, from 82-82, the home side put together a closing 10-0 run to take the win, with Paul Guede coming up huge with plays at both ends.

Ladarius Tabb registered another double-double posting 24 points and 14 rebounds, while Justin Robinson just missed out after handing out 9 assists to go with 22 points and Guede had 13 with a huge three and defensive steal in overtime.

BBL Championship
Radisson RED Glasgow Rocks made it two wins over Manchester Giants in as many weeks with a 76-83 victory.

The Rocks take down the @McrGiants in Manchester.

The Rocks backed up last week’s BBL Cup Semi-Final First Leg success to move to 4-8, while Manchester end up splitting their weekend double-header as they are now at 4-5.

The Giants were slow out of the blocks following their dramatic victory on Saturday night and the Rocks capitalised with a 28-point first quarter and they would lead by as many as 32 at 15-47. The hosts battled back with a stronger defensive display, but only to reduce the final losing margin.

Ali Fraser produced an all-round effort of 23 points, 9 rebounds and 6 assists with Tadas Rinkunas firing in 16 points off the bench and Kieron Achara came up with 5 blocks to go with a double-double of 14 points and 13 boards.

Willie Clayton had 22 points and 13 rebounds to lead Manchester, with Callum Jones adding 16.

BBL Championship
Cheshire Phoenix completed a successful double-header with their second win of the weekend as they inflicted a 93-74 loss on Surrey Scorchers.

Phoenix started strong with 28 points in the opening quarter to take control and they never looked back with their lead peaking at 19 as the Scorchers were unable to make up the early deficit.

CJ Gettys top scored with 20 points along with 11 rebounds and 4 assists with all five starters in double figures including Dii’jon Allen-Jordan who also added 11 rebounds along with 6 assists to his 16-point haul.

Quincy Taylor had 23 points to lead Surrey, with Caylin Raftopoulos 12 and Willie Atwood 11 points and 10 rebounds.

Ben Thomas’ side improve to six league wins from 13, while the Scorchers see their tough start continue as they drop to 2-10 – four wins adrift of eighth spot.