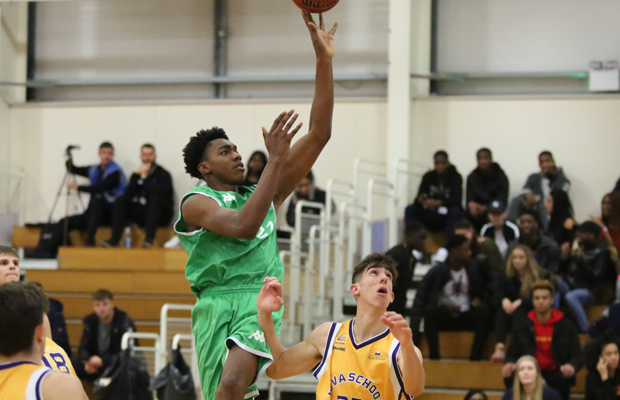 Pool play came at the 2018 Haris Memorial Tournament came to a close on Friday, with both Myerscough and Blue Ridge School finishing undefeated at 3-0.

Nova closed regulation on a 16-0 run, holding Charnwood scoreless for the final five minutes and converting a three point play in the dying seconds to force the extra period, but Will Maynard’s side re-grouped in the extra period, coming up with plays down the stretch to pull out the win.

Niall Harris went 10-of-14 from the field for his 28 points, adding 7 rebounds – 4 on the offensive glass, whilst Mayo Adekeye added 17 and Josh Lloyd and Greg Wild had 12 each.

Both teams struggled to find the basket early, as Manchester held a 27-17 halftime lead in the turnover-laden contest, but it wouldn’t be until the final five minutes, where they held Kent to just 4 points, that they would pull away for good.

Luke Gordos had 15 to lead Manchester, Json Anl had 14, whilst Dan Gargan had 10.

Milo Gordon had 18 points and 11 rebounds to lead Kent, with Chester Morrell the only other player joining him in double figures with 11.

Miguel Barros led Povoa with 19 points, whilst Diogo Gomes had 11 points and 6 assists.

Haris Select vs Myerscough College
Myerscough rotated early and often on their way to a 67-41 victory over Haris Select Under-16s.

.@MateOkros gets into the lane and explodes for the two handed dunk for @My_bball vs Haris Select at @HarisTournament! 💪🇬🇧🏀 #Haris2018 #Hoopsfix pic.twitter.com/mstMxc8djQ

All 12 players on Myerscough’s roster saw at least 10 minutes, as they jumped out to a double digit lead in the first quarter and never looked back, as the two teams combined for 58 turnovers.

Bradley Kaboza had 19 points to lead Myerscough, Lewis McGlasson and Sanmi Fajana had 12 each, whilst Mate Okros added 7 points, 5 rebounds and 5 assists in just 14 minutes.

Bryan Akanwu was the only player to reach double figures for Haris, with 10 points, Seb Mobee had 8 points, whist George Clark and Ryan Ganneclift added 5 each.

Michael Gray shows the handle before dishing to Houston Emory (@Hemory15) for the big and-1 dunk for @BlueRidgeHoops at @HarisTournament! 🇺🇸🏀 #Hoopsfix #Haris2018 pic.twitter.com/3C2iQKOFLw

Blue Ridge knocked down three consecutive triples to open the game on a 9-0 run as a sign of things to come, as Manchester were unable to handle the press and struggled to get into the game.

William Lee led five players in double figures for Blue Ridge with 19 points, Savion Helm had 18, and Chris Rogers 15, as the US squad registered 28 assists on the game, shooting over 50% from the field.

Dan Gargan was the only player in double figures for Manchester with 11 points, and Noah Togo had 8.

CD Póvoa vs Kent Crusaders
CD Povoa advanced to the semi-finals with a 76-64 victory over Kent Crusaders, who finish 0-3 and head into the 5th-8th place playoffs.

Crusaders were able to stay in striking distance throughout, but unable to get over the hump, not helped by 45% free throw shooting (9/20).

Diogo Gomes had 20 points, 7 rebounds and 4 assists for Povoa, Miguel Barros had 18 points and 15 rebounds, whilst Lukas Rosenbom had 16 points.

Chester Morrell went 6-of-8 from three point range to lead Kent with 22 points, whilst Milo Gordon had 20.

Leading by just seven at halftime, Myerscough turned it up in the third, led by big man duo Amari Williams and Sanmi Fajana, pouring in 30 points and extending their lead to 23 heading into the fourth.

CB Nova were led by 19 points from Pablo Villanueva, and 12 a-piece from Francisco Montiel and David Garzon.

Haris Select vs Charnwood College Riders
Charnwood took a 94-59 win over Haris Select to finish the Pool stages 2-1 and will be in tomorrow’s semi-finals, whilst Haris Select fall to 0-3, and are now playing for fifth place.

Charnwood went up 33-11 after the opening period and were in cruise control the rest of the way, led by Joe Bielak’s 27 points and 15 points apiece from Blaize Sagna and Niall Harris.