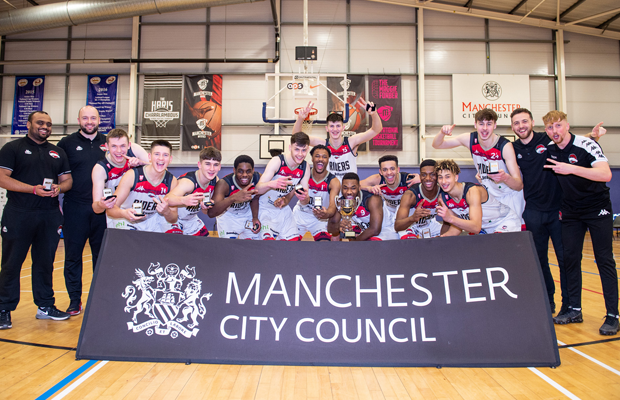 Charnwood College defended their title with a thrilling 82-80 victory over Myerscough College in the Haris Memorial Tournament 2018 Championship Final on Sunday evening in Manchester.

Charnwood avenged their seven point group stage loss to Myerscough on Day 1, executing when it mattered down the stretch, in a game that proved to be an incredible individual battle between eventual MVP Niall Harris – who finished with 39 points, 17 rebounds, 3 assists and 3 steals for an efficiency rating of 48 – and Mate Okros – who had 32 points, 15 rebounds, 3 assists, 4 steals and 1 block.

With Charnwood having led by as many as 16 in the third quarter, Myerscough came alive behind Okros – who scored 27 of his 32 in the second half, having been neutralised by Harris across the first two quarters – to make it interesting down the stretch. Myerscough pulled to within one heading into the final minute, but a huge triple from Blaize Sagna gave them a four point cushion (video below), as Harris knocked down free throws down the stretch to seal the victory.

.@BlaizeSagna's HUGE late three for @CharnwoodBball to give them a 4 point cushion with 24.3s left in the @HarisTournament final 🎯🇬🇧🏀 #Hoopsfix #Haris2018 pic.twitter.com/Bx87dY31ia

“It feels great to be back to back champs and I’m honoured to be named MVP,” Harris commented.

“We played great as a team and despite a slow start we finished the tournament playing our best basketball, beating teams nobody thought we’d beat. I want to give a big shout out to my teammates, without who, I never would’ve had the opportunity to be this years MVP.”

“It was a great run for us throughout this tournament facing two extremely talented teams in the semi-final and in the final. The final was an incredible game to be a part of, two competitive teams going at it all the way to the wire.

“Niall was obviously outstanding, but each and every one of our guys contributed not only in the final but all the way through the tournament. A massive thank you to Phil Gordos and the rest of his team at Magic for allowing us to be part of this fantastic event. Now we continue to build going forward into the second half the season with Charnwood.”

Blaize Sagna added 14 points and 6 assists for Charnwood, and Joe Bielak joinged him in double digits with 10.

“It’s always tough to fall on the wrong side of the result in a championship game but credit to our guys for not giving in and battling all the way to the end.

“Heading into the tournament I highlighted its value on testing where we are as a group three months in and over the course of the three days this certainly happened. There are a number of positives that we can take away but ultimately we need to be more consistent in executing the things we have already demonstrated we are capable of doing both domestically and overseas.”

Sanmi Fajana complemented Okros with 16 points and 8 rebounds, Lewis McGlasson had 12 and Bradley Kaboza finished with 10. 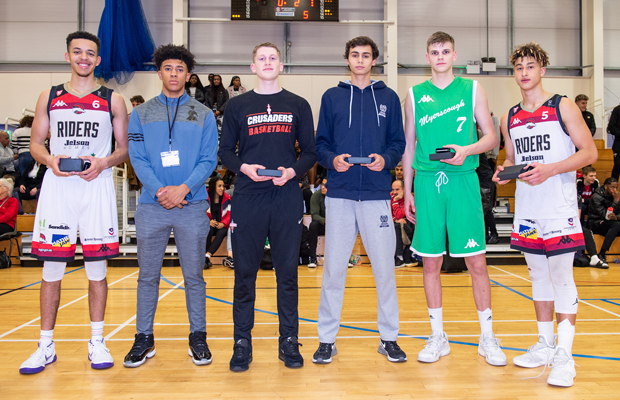 Charnwood’s Will Maynard picked up the coach of the tournament, finishing 4-1 across the event, whilst defending their title.

Myerscough made light work of CV Povoa with a 103-57 defeat in their semi-final.

Myerscough pounced early, holding a double digit lead before the end of the first, and were up by 20 by halftime, as they went deep into their rotation in the second half, with the starters getting some rest ahead of the final.

Jamie Gray had 22 points to lead Myerscough, Bradley Kaboza finished with another 20 point outing, whilst Amari Williams had 13 points. Lewis McGlasson finished with 7 points, 6 rebounds and 5 assists, whilst Mate Okros had 7 points, 4 rebounds, 5 assists and 3 steals.

Lukas Rosenbom had a 10-point, 10-rebound double-double for Pova, with Goncalo Dias leading the scoring with 12 points, and Diogo Gomes having 8 assists with his 6 points.

Charnwood College pulled off a 74-82 victory over Blue Ridge, as Niall Harris once again proved instrumental.

Harris battled through foul trouble to carry Charnwood, he scored 14 points with 4 minutes left to go in the first half before being forced to the bench, and then scored another 11 in the fourth quarter to lead his side to victory.

Harris finished with 25 points, 9 rebounds and 3 assists, whilst Greg Wild had 12 points, Blaize Sagna and Joe Bielak added 10 each, with Ethan Damerum having 8 points, 7 rebounds and 6 assists.

Michael Gray had the third best individual scoring output of the tournament with 29 points, and Jaden Frazier had 15 points

Leading by just 8 at halftime, the American school held Povoa to just 17 points in the second half (5 in the fourth quarter) whilst pouring in 51 of their own.

Seven players reached double digits, led by 16 from Chris Rogers, whilst Houston Emory had 10 point, 10-rebound double-double. Blue Ridge blocked 10 shots on the game, led by 4 from Sasha Glushkov, to go with his 10 points and 8 rebounds.

Miguel Barros continued his strong tournament with 26 points and 9 rebounds, whilst Diogo Gomes had 10 points, 5 rebounds and 8 assists.

Crusaders held Magic to just three points in the third to build a comfortable lead and pull out the win.

Josh Grant led Manchester with 11 points and 7 rebounds, as the only player to reach double digits.

CB Nova vs Haris Select (7th Place Playoff)
Haris Select Under-16s came agonisingly close to picking up their first victory of the tournament but fell 73-68 at the hands of CB Novaschool, to finish in 8th place.

Having trailed by as many as 14, Haris Select managed to pull it back and stay close but were unable to come up with plays when it mattered.

“It was really beneficial for myself and the staff to get an early look at the talent at this age group,” Haris Select Head Coach James Vear reflected on the tournament.

“I thought they did really well considering most of the teams were a couple of years older than them, we have some talent and I’m excited to see how they develop in 2019.”

For Haris Select, Pharrell Wallace-Steele led the scoring with 13, Victor Ndoku had 10pts and 9 rebounds, whilst Rory Urquhart-Hawkins and Simeon Perry added 10 each.

CB Novaschool were led by 17 points from Ignacio Folgueira, 15 from Kike Pena and 11 from Pablo Villanueva.

Kent Crusaders vs CB Nova
Kent needed overtime to escape CB Nova 74-72 to advanced to the 7th place playoff in the morning games, as the Spanish side refused to go down without a fight.

Crusaders rode an impressive performance from Chester Morrell, as he knocked down 7 three pointers, including the go-ahead triple in the extra period with less than 30 seconds remaining before Kent sealed the result at the line.

Pablo Villanueva led Nova with 21 points, whilst Garzon had a double-double with 15 points and 15 rebounds.

Magic rode a strong start to the game, leading by as many as 25 in the third quarter, and received 26 points from 29 Haris turnovers to pull out the win.

Sultan Adeware led Haris with 19, and Bryan Akanwu and Callum Crossman had 8 points each.