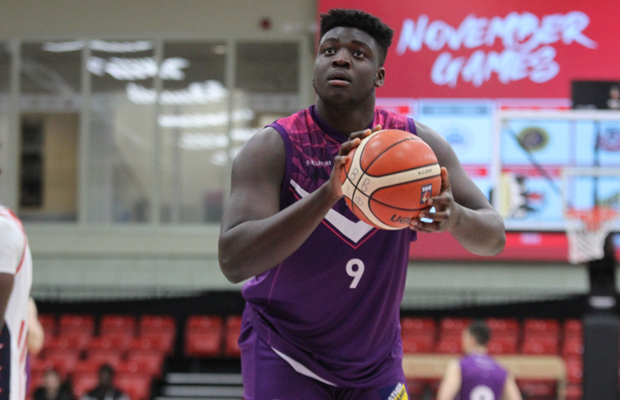 Great Britain Under-18 and Loughborough/Charnwood big man Hosana Kitenge has announced his commitment to NCAA Division 1 school Coastal Carolina Chanticleers for the 2019-20 season.

The 6-foot-7 forward, who won a title with NBL Division 1 side Loughborough last year and also plays in the EABL for Charnwood College, chose the Chanticleers from a final three that included Portland and McNeese.

Happy to announce that I will be attending the university of Coastal Carolina 💙 I thank God for every blessing o have received in my life and I also would like to thank everyone who got me to where I am today !🙌🏿 can’t wait to get to myrtle beach 🏝 pic.twitter.com/jqVpRqMJvy

Considered one of the top players in the Class of 2019, the 2000 born Kitenge was a part of the GB Under-18 squad the retained Division A status this summer, played at the Hoopsfix All-Star Classic this summer and finished number 3 at Deng Camp in August.

“I knew after my visit to Carolina that it was going to be the place for me,” commented Kitenge. “They made me feel very welcome and part of the Chants family.

“I’m excited by the vision for the programme and I can’t wait to be a part of it. I had the opportunity to visit. I really enjoyed my time there and speaking with coach Ellis. They have a great setup and I like the way that the coach wants to play. I’m really ambitious and excited to play a big role for the team.”

Kitenge is originally out of the Worthing Thunder programme, making his NBL Division 1 debut at just 15 years old and going to represent the England Under-16s.

He would establish himself on the Worthing roster the following season and represent Great Britain’s U18 side for the following two seasons, helping them achieve promotion to Division A in his first year with them, and retaining their Division A status this summer. He led GB in rebounding (8.6 per game), to go with his 8.6 points, 1.7 assists and 1.1 steals per game.

In 2017 he left Worthing to study in Leicestershire at Charnwood College whilst also playing in NBL D1 for Loughborough Riders were he would hold a key role in their title winning season.

Kitenge had offers from numerous division one schools, and took an official visit at the end of October.