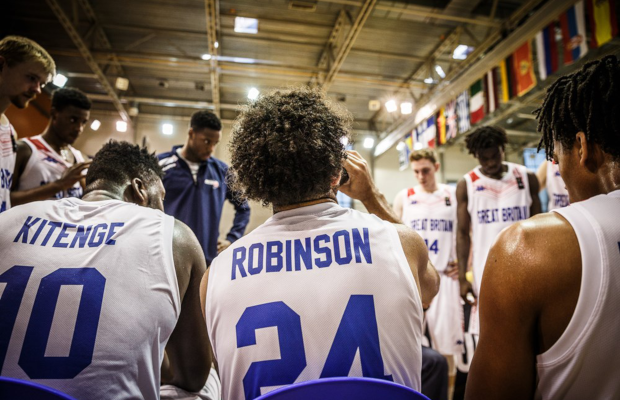 Great Britain Under-18s finished in seventh spot at the European Championships after beating Montenegro 70-68 on the final day, in Riga.

Alan Keane’s side had already secured a highest-ever Division A placing for a British men’s youth team having reached the quarter-finals by beating Finland earlier in the tournament, but overturned a double-digit deficit to prevail.

The final moments as GB U18s take 7th – their best ever finish – at #FIBAU18Europe 🎉🇬🇧🏀 pic.twitter.com/H08zH5RxlH

Nathan Robinson top scored with 19 points in the 7-8 Classification round victory with Kareem Queeley adding 14 points, while Hosana Kitenege had 12 points along with 11 rebounds and four assists.

GB had a slow start as they faced an early double-digit deficit as their opponents opened up a 25-14 lead. However, GB put up 24 points in the second period as they battled back to close the gap.

Once again, GB fought back and held their opponents to just five points in a strong run to take the lead on the back of another three from Robinson. Montenegro levelled from the foul line, but Jacob Round was on hand in the final minute to put GB back in front and the defence stood firm for the win.

Both GB’s Under-20s and Under-18s have retained their Division A status, while the Under-16s begin their promotion quest from Division B later this month – tipping on 9 August in Sarajevo.