GB Under-18s Ease Past Denmark, But Miss Out on Last Eight - Hoopsfix.com

GB Under-18s Ease Past Denmark, But Miss Out on Last Eight 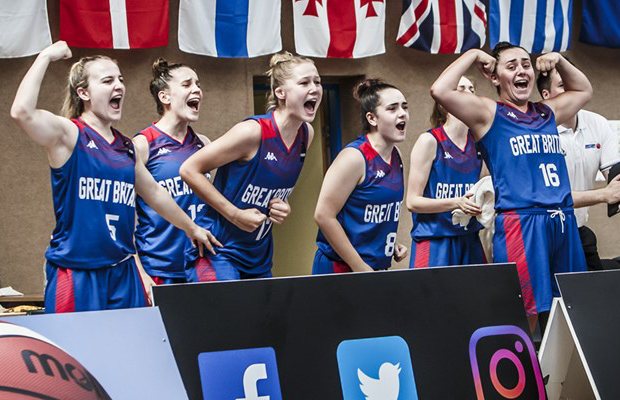 Great Britain Under-18s produced an impressive display to beat Denmark 83-62, but missed out on a place in the quarter-finals at the European Championships.

Vanessa Ellis’ side secured the necessary margin of victory – 9+ points – though Turkey’s victory over the Netherlands earlier in the day prevented a top-two finish in the group for GB.

Holly Winterburn starred with 17 points along with six rebounds and six steals steals, while Shawnisay Millar added 16 points and Charlotte Ellmore had 13 with seven rebounds and five assists.

Denmark started the stronger of the two sides before GB began to get into their rhythm and they edged the opening period, 20-19.

Another bright start early in the quarter saw Denmark move back ahead, but GB’s defence sparked a 17-2 close to the half to establish a commanding 43-28 advantage with Winterburn scoring eight points in the period.

Shauna Harrison scored the first five points of the second half to make it a 20-point lead for GB. Denmark enjoyed a brief rally, but could not get back into single figures as GB took a 67-51 lead into the final quarter.

GB never looked back and were able to complete a convincing victory as they held their opponents to just 11 points in the final quarter.

Netherlands advance as the group runners-up having beaten both GB and Denmark to take the head-to-head in the 3-way tie.

GB drop into the 9-16 Classification Round with their next game on Friday against Slovakia at 7:15pm UK time.