GB Under-18s Battle Back to Beat Hosts in Euros Opener 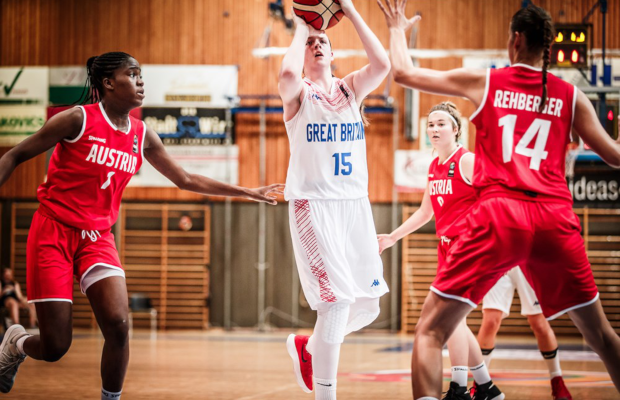 Great Britain Under-18s overturned a 14-point deficit as they beat Austria 53-50 in their European Championships opener in Oberwart, on Friday.

Vanessa Ellis’ side held the hosts to just 14 points in the second half as they recovered to get their Division B campaign off to a winning start.

Shauna Harrison led the way with 17 points and 13 rebounds, while Holly Winterburn added 11 points – including a 3-point dagger in the final minute to help ice the victory.

GB were slow to get going and found themselves trailing 20-8 at the end of the opening quarter. The deficit was halved midway through the second before Austria restored their 12-point advantage to lead 36-24 at half-time.

The gap peaked at 14 points early in the third, but GB stepped it up on the defensive end and held their opponents scoreless for the final 8:18 of the quarter to trail by seven at 40-33.

Austria’s seven-point lead remained at 47-40 with 6:28 remaining before GB’s fightback began to pick up pace, sparked by their defence. The hosts’ next points came in the final minute by which point GB moved ahead.

Harrison scored five points in a 10-0 run before a key offensive rebound helped set up Winterburn for a dagger three to make it 53-47 with less than a minute to go and GB were able to hold on for the win.

GB face Turkey – who were beaten by Denmark – in their second game at 7:15pm UK time on Saturday.