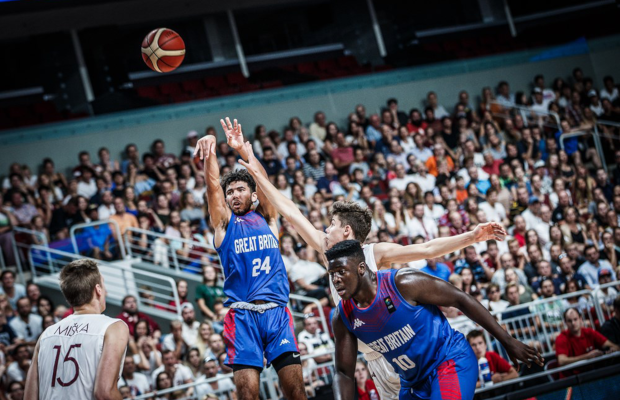 Great Britain Under-18s were beaten 76-51 by hosts, Latvia in the quarter-finals of the European Championships in Riga, on Friday.

Alan Keane’s side will now play for a best possible finish of 5th – which would still guarantee a historic trip to next year’s FIBA U19 World Cup.

Nathan Robinson top scored with 16 points in the defeat, while Hosana Kitenge hit double figures in rebounds with 13.

GB moved ahead in the first quarter on the back of a 9-2 run, but Latvia scored the final basket to edge the opening period, 14-13. The second quarter was just as evenly contested though the gap did narrowly increase in favour of the hosts at 33-30 going into half-time.

GB missed five consecutive 3-pointers to start the second half as the deficit hit double figures for the first time at 40-30. Robinson broke the drought with his fourth triple, quickly followed by a dunk from Queeley to cut the gap.

However, that was as close as they would get as Latvia went on a pivotal run to take a commanding 59-43 advantage into the final period. The lead soon moved past 20 points with GB held scoreless for over five minutes in the fourth as they fell to their third loss of the tournament.

GB are back in action tomorrow as they face either Russia or Lithuania – whoever loses their last eight battle – in the 5-8 Classification round at 2:15pm UK time.