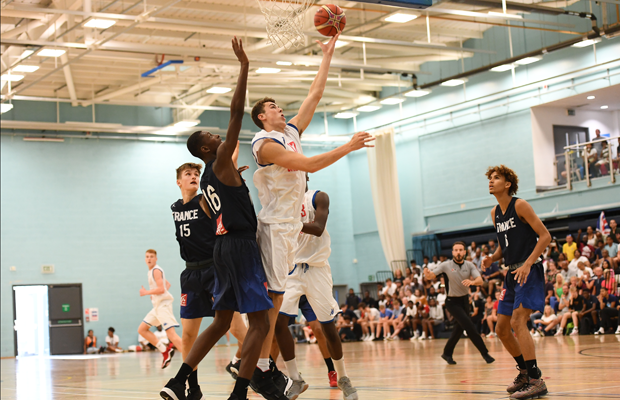 Great Britain Under-16s were unable to pick up a victory but showed marked progress across their two game preparation series versus France this weekend at UEL Sportsdock in East London.

In a closed door scrimmage on Saturday, Head Coach James Vear’s side lost 82-42, never getting into the game as they turned it over 32 times, but on Sunday, in front of a packed house, they went down 72-48, in a game that was a lot closer than the score might suggest.

GB remained in the contest until the fourth quarter, in a game that featured 14 lead changes, but were unable to recover from 25 turnovers, which the visitors converted into 29 points.

Veron Eze led the side with 10 points on Sunday, Cameron Hildreth had 9 points and 3 steals, whilst Matthew Marsh had 10 points, 5 rebounds and 2 blocks without missing a field goal.

On Saturday, Segun Shodunke led the scoring with 13 points, Veron Eze had 9 points whilst Matthew Marsh was a force inside with 8 points, 13 rebounds and 2 blocks.

“They’re a very impressive team, they are trying to challenge for a Division A medal this year,” Vear said of their opposition after Sunday’s game. “Our goal is just to keep getting better every single day in everything that we do, and I thought we did that today, I was proud of our guys.

“I think we had a few mental lapses at time especially in the fourth – a little bit in the third as well – but overall there was a huge amount of positives to take. If we play like that next week, I think we’ve got a good chance of doing well.”

GB will fly out to the Division B European Championships in Sarajevo on Monday, as they open up the competition on Thursday against Ireland.