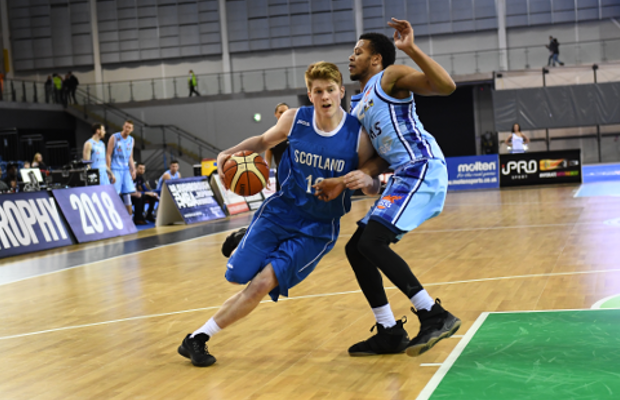 Callan Low is one of 44 players heading to Brixton this weekend for the fourth edition of the Hoopsfix All-Star Classic – showcasing the top junior talent in British basketball.

The Kilmacolm native will compete in the inaugural Underclassmen game (rosters HERE) for Team Black as one of four Scots to feature in the event.

“It’s a great honour to be selected for the Hoopsfix All-Star Classic and I feel privileged to have been invited to play,” he said.

“I think that bringing together the best players in junior basketball creates a great advert for the sport and it’s bound to produce great games.”

Four years ago, Low was picking up a basketball for the first time at the age of 13.

Rejections and setbacks followed, but only added more fuel to a journey that led to a historic selection at this year’s Commonwealth Games on the Gold Coast.

Low became the youngest player to represent Scotland in the competition and the team went on to secure a commendable fourth place finish, missing out on a medal at the hands of New Zealand.

“It was a fantastic experience,” he recalled. “It was something that I had worked extremely hard to achieve and I was very grateful to have been selected, especially at the age of 17.

“At the Games, I feel that I was constantly learning and improving by training alongside guys like Kieron Achara and Gareth Murray, and of course it was incredible to work with a coach like Rob Beveridge – who is a master of the game.”

Last summer, Low was part of the GB Under-18 3×3 side – including two other HASC18 participants in Jonathan Brown and Robin Bedford – as they narrowly missed out on qualification for the 3×3 FIBA Europe Cup.

The qualifiers in Hungary followed another near-miss for Low after being one of the final cuts in the first-ever GB Under-18 squad that would go on to secure promotion to Division A.

The teenage guard is hoping to be part of the final 12 this time around with GB having been grouped with Lithuania, Montenegro and Serbia in Latvia.

“My motivation towards playing at the international level has always been extremely high,” he said.

“I’ve played for Scotland for several years and I feel that representing my country/nation is a huge personal achievement.

“When I was younger, I trialled for the Under-14 Scotland National Team, but didn’t get selected and that made me determined to improve and earn a place in future National Teams – an aim I achieved the following year.

“I am intensely driven and I am currently focussing my training on being selected for the Under-18 GB team as I just missed out on the final squad last year.”

Low has enjoyed plenty of success at club level, too, with multiple junior titles at Paisley, before continuing that trend at Myerscough Basketball Academy.

A 12-point, 8-rebound display helped the Senior team secure the National Shield title in February in the first part of a memorable treble in NBL action, while Low was also part of the side that reached the EABL Championship Final, before falling to Barking Abbey.

“This season has been outstanding for both myself and Myerscough,” he declared. “The success we have had over the course of the season in U17, U18, EABL and Division 3 shows that the amount of hours we put in together on court paid off.

“I have enjoyed every minute of it and feel Myerscough is a great place for basketball players that are looking to improve within a competitive environment.”

Having already ventured from Kilmacolm to the Gold Coast; Low’s basketball journey has many more destinations ahead – starting with Brixton today – and while Liepaja [FIBA U18 European Championships host city] is on the wish-list this summer, there is a bigger goal in mind.

The North-West of England is a lock for next season as Low aims for even more success at Myerscough in 2018-19 before the time comes to head to the States.

“That has been a primary goal since I started playing and is something I have been working towards throughout my whole career.”

Check out Low in action today with the rest of the top British basketball juniors, LIVE on Hoopsfix’s YouTube channel with highlights broadcast on Free Sports on Tuesday night at 9pm.