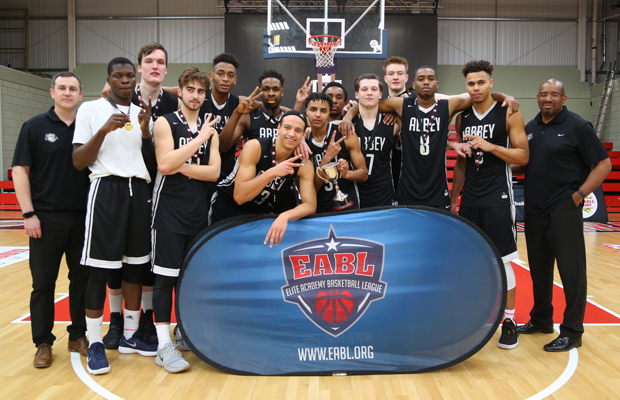 Barking Abbey successfully defended their EABL title after beating Myerscough 96-83 in a convincing display in Thursday’s final at Leicester Arena.

Caleb Fuller was named MVP after contributing 18 points, 8 rebounds and 7 assists in the win with Ade Adebayo also impressing with 18 points along with 6 assists and 5 steals.

“Me and my team put in a lot hours in the gym leading up to this game so today we were very confident due to our hard work,” declared Fuller.

Sean Nealon-Lino added 13 points with Theo Hughes also in double figures with 10, while three other players all hit 9 points for BA in a balanced scoring attack.

BA produced a dominant start as they poured in 32 points in the opening quarter to establish early control with a double-digit advantage.

Myerscough were slow to recover and despite edging the second quarter, they still trailed by 11 at 49-38 going into the half-time break. And, BA broke further clear in the third with a 12-3 start before Andre Laviner netted three consecutive treys to help his side to a 73-51 lead.

It was a long way back with 10 minutes to go, but Myerscough fought until the end as they scored 32 points in the final period in an entertaining finish as BA were able to celebrate victory in the EABL final for the second year in a row.

“We have a lot of weapons on offence and we showed that today.”

Konrad Kantorski fired in 26 points in defeat for Myerscough with Mate Okros putting up 20 points, 15 rebounds and 5 assists.

“I think we’ve done really well with this group to get to this position,” Myerscough Head Coach Neal Hopkins said.

“We knew it was going to be tough against this BA team that are stacked at every position, super well coached and played their hearts out. They caught us from the first quarter and we found it really hard to recover from that.”

And despite the final loss, Hopkins reflected on the season positively:

“It was a difficult season coming into it, I think we’ve overachieved with a really good group; they’re a super group and done really well for me. I can’t discredit anything they’ve done this year, they’ve been awesome.”

Watch the replay of the game on Facebook here.