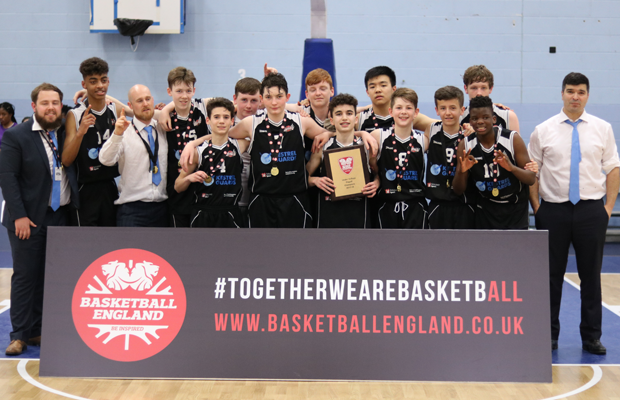 Team Solent Kestrels took the 2018 Under-14 national title with a 75-50 win over Brentwood on Sunday at the NBPC in Manchester.

With a second impressive performance in as many days, Solent’s George Clarke was able to secure the MVP award with a 20 point, 8 rebound, 2 assist and 2 block outing.

“I’m just absolutely thrilled! Ecstatic!” said Team Solent Kestrels Head Coach Khalid Missouri. “I’ve been coaching these guys for three years now and this is culmination of really, really hard work. Most importantly, I’m so pleased for the boys. They really deserve this!”

In the early going Brentwood were able to match their opponents, but after that the conference side fell away and couldn’t put the finishing touches on a fairy tale post-season run. Down by five after the first quarter, that deficit grew to 11 at the half and 17 at three quarter time.

For the second day in a row, Rockets’ guard Tyrese Lacey impressed, this time settling for 18 points after his 35-point explosion yesterday. Lacey received good support from Ali Abushego who finished with 17, as Birmingham transitioned a 39-25 advantage at the half into a 17-point win. Bradley May top scored for Manchester with 14.

Semi-Final 1
City of Birmingham 63 v 85 Team Solent Kestrels
Solent were able to confidently seal their place in Sunday’s Final with a solid performance over COB.

A close game going into the half time break, the Kestrels pulled away during the third and never looked back.

Midway through the 3rd it was Solent who were in the ascendancy after an 11-1 run to start the period, and taking the final frame 22-9 put the result firmly beyond doubt.

Semi-Final 2
Brentwood Fire 51 v 50 Manchester Magic
After racing out to an early lead, Brentwood were just able to hold off a charging Manchester side, 51-50, in a game that went down to the very last possession.

A three pointer by Brentwood’s Reuben Potter (15 points, five rebounds, three steals) with 1:09 left proved to be the game’s final basket as both sides desperately tried to put the result beyond doubt.

Everything in the early going went the way of Brentwood, who had built a 14-point lead early in the second quarter. From there though, Manchester fought hard to find a way back into the game and were eventually rewarded midways through the 4th.

Finally in front with 5:23 to play, the momentum was with Manchester and the win looked to be theirs for the taking. Brentwood wouldn’t be denied though, regrouping and digging deep to claim the win.