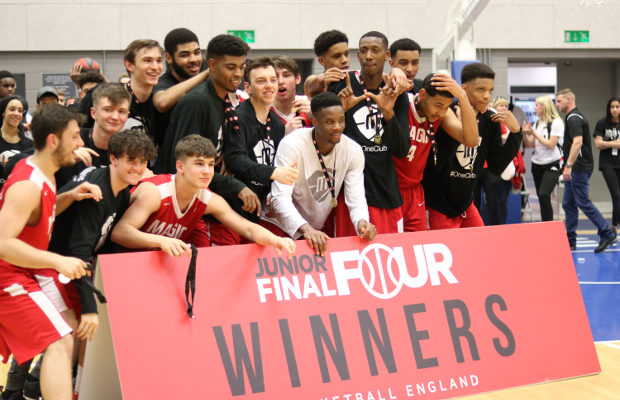 Manchester Magic are the Under-18 National champions after they defeated Myerscough College 73-71 in overtime in Sunday’s final at the National Basketball Performance Centre, in Manchester.

Michael Anumba picked up the MVP award after finishing with an impressive 25 points, 13 rebounds and four assists in the win as Magic battled back in the fourth to force an extra period.

“We’ve been trying for the last few years to do this now with the U18s, I’m really proud of them,” said Manchester’s Head Coach Peter Paraskeva.

“The crowd were next level, we needed that. At the end we were struggling for energy and had guys fouled out, our club really needed it. I had no idea what was going to happen at the end.

“I knew we’d get it close but to take it to overtime and go from there was special.”

Manchester led 22-12 after 10 minutes, but Myerscough responded well and a dominant third period put them 48-54 ahead going into the final quarter. A 7-0 run put Magic up 61-60 before needing a late basket from Arinze Emeka-Anyakwo to send the game into overtime.

Sam Fuge hit a big three – his first points of the contest – to put his side up 71-67 ahead of the final minute and Manchester were able to close out the victory.

For Myerscough, Lewis McGlasson had 17 points and Callan Low finished with 15 along with six rebounds and six assists.

In the third/fourth place playoff, London Thunder-Lewisham defeated Team Birmingham Elite 74-67 as they bounced back from their semi-final defeat against Myerscough the previous day.

Manchester Magic marked their return to the Under-18 National Championship Final with a convincing 67-81 victory over Team Birmingham Elite.

Magic recovered from a 21-14 deficit after 10 minutes as they took control of the middle periods by scoring 46 points to establish a double-digit advantage, and there was no way back.

Michael Anumba starred in the win with 26 points, 11 rebounds and 5 assists, while Sanmi Fajana and Dan Gargan combined for 29 points off the bench and Wesley Oba hauled down 15 rebounds without scoring.

Meanwhile, Zack Powell had 21 points for Birmingham with Conroy Hayden posting a double-double of 10 points and 16 rebounds as they were left to rue a costly second quarter as they were held to just eight points.

Myerscough set up a Final showdown with Manchester after surviving a thrilling semi-final encounter as they prevailed 53-54 against London Thunder-Lewisham.

Both sides edged ahead down the stretch but it would be a pair of free throws from Daniel Chima that decided the outcome in a low-scoring affair.

Callan Low top scored for the victors with 17 points with Michael Adebayo and Joshua Adeniyi scoring points apiece for the Thunder.