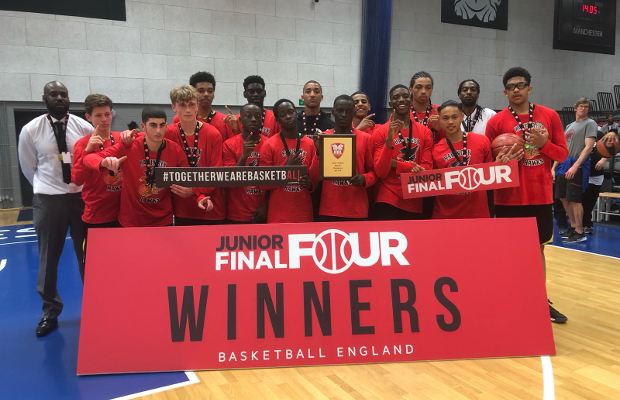 Haringey Hawks defeated Manchester Magic to win the Under-16’s National Championship with a 71-55 success in Manchester, on Sunday.

Moyo Adekeye led a balanced attack with 15 points, while Franklin Agu hauled down 20 boards to go with 11 points as five players hit double figures for the Hawks.

“We’ve been to the Final Fours a number of times. Finalists, third place. We said before this year that we’ve been bridesmaids too many times, we have to win. It paid off,” said Haringey Head Coach, Franck Batimba.

“This means everything to us. Things like this help to give kids in Haringey some focus, and that’s really important.”

Haringey lost in the 2017 final to Worthing Thunder, but produced a strong display as they scored 20+ points in the opening three quarters to establish a 13-point advantage.

They were able to close out the win after edging a low-scoring fourth 9-6 to be crowned champions.

Jason Ani had 17 points and 12 rebounds in the defeat for Magic with no other player reaching double figures.

Meanwhile, Ipswich took third as they defeated London Greenhouse Pioneers 67-60 to end their weekend on a high.

Haringey Hawks eased into the Under-16 National final after beating Ipswich 84-59 behind a strong start.

The Hawks led 23-11 after 10 minutes before holding their opponents to single figures in the second quarter as they continued to extend their advantage.

Moyo Adekeye top scored with a game-high 22 points along with nine rebounds and three assists, while Tashan Gray collected 19 rebounds to go with 16 points.

For Ipswich, they scored 40 points in the second half after being held to 19 in the first and Jacob Morgan had a team-high 21 points.

Manchester advanced to another final after seeing off London Greenhouse Pioneers in their last four encounter.

Greg Wild top scored for Magic with 14 points to lead a balanced attack, while Luca Bastoni also had 14 for the Pioneers in defeat.

Manchester started strong with an 18-8 opening period and never looked back with a dominant third – 17-8 – seeing the lead peak at 29 points.

The Pioneers finished shooting at 29% from the field with 2 of 20 from beyond the arc, while Manchester were more clinical with nine triples.