Sevenoaks Suns Make it a Double with Defence of WBBL Play-Offs Title - Hoopsfix.com 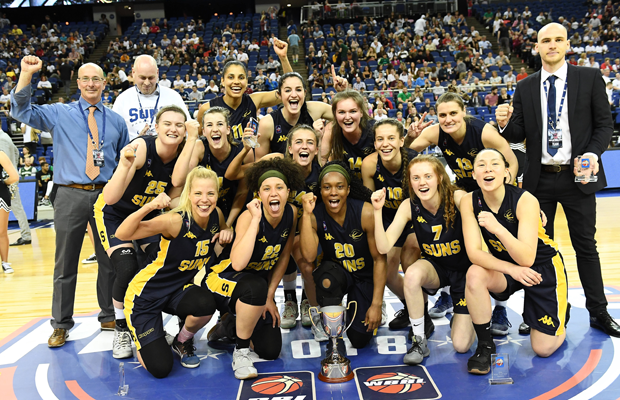 Sevenoaks Suns made it a double on the 2017-18 season with a 69-44 rout of Leicester Riders in the WBBL Play-Offs Final on Sunday afternoon at The O2.

Regular season MVP added another individual honour to her trophy cabinet with 19 points, 8 rebounds and 8 assists to be named finals MVP, as Sevenoaks Suns pounced early and never looked back.

2017-18 double winners after defending their Play-Offs title at @TheO2!#BritishBasketball pic.twitter.com/ok6a0Qp4Cd

The Suns collected their fourth title in two years, the club’s consecutive double, having already secured Championship honours at the end of April.

Chantelle Pressley added 12 points and 9 rebounds, and Judit Fritz joined her in double figures with 10 points.

Sevenoaks exploded out of the gates, racing out to an 18 point advantage by half-time. The Suns put on a defensive clinic in the first 20 minutes, holding the usually free-scoring Leicester Riders to just 22 first-half points.