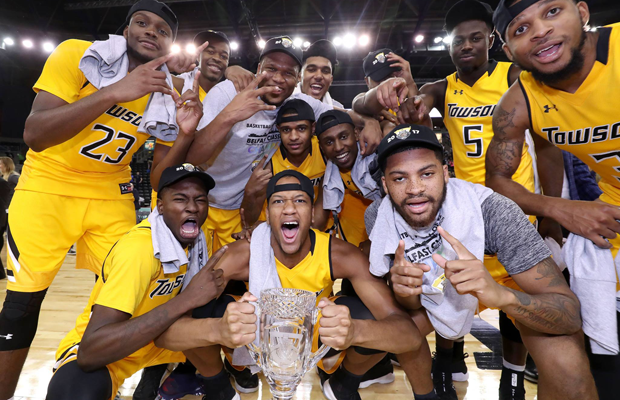 NCAA Division I College basketball is coming back to Belfast, Northern Ireland for 2018.

The Sport Changes Life Foundation (SCLF) in partnership with the Naismith Memorial Basketball Hall of Fame (BHOF) and the Metro Atlantic Athletic Conference (MAAC) will host its second ‘Belfast Classic’ in the SSE Arena, Belfast on November 29th, 30th and 1st December 2018. The tournament will be broadcast live across America.

The 2018 event will feature an expanded field to eight schools. The schools will compete in two four-team brackets, with University campus round games in America leading into two tournament brackets in Belfast aptly named ‘Samson’ and ‘Goliath’ after the iconic Harland and Wolfe cranes in the Titanic quarter ship yard of Belfast.

Ready to play in the @BelfastClassic this season! See you in Northern Ireland! pic.twitter.com/AmxzD75xHi

Take a look back on the highlights from 2017:

The Basketball Hall of Fame Belfast Classic was set up to raise awareness of the Sport Changes Life Foundation (SCLF). Established in 2007, Sport Changes Life is dedicated to raising the aspirations of young people using sporting excellence, academic achievement and personal development.

SCLF achieves this through its flagship Victory Scholar Program which brings graduate student athletes from the US to Northern Ireland and Ireland to deliver a number of youth engagement programs with young people at risk. The impact and legacy of the 2017 event has seen over 9,000 people in attendance at the event while a United States television audience watched the games live via their broadcast partner CBS Sports Network.

“We are so proud of how far the Sport Change’s Life Foundation has come in the last few years. Our Victory Scholars and our community engagement programs are truly making an impact in thousands of young people lives.

“The inaugural Basketball Hall of Fame Belfast Classic 2017 was a huge success and this year we are delighted that we have twice as many teams to engage in our community when they are here. This allows us to expand our reach to young people, which is our core business.

“It also allows us to showcase the importance of an international experience for American student-athletes and celebrate how good our city is at hosting major sporting events.”

“We at Sport Changes Life are delighted to present our 2nd Annual BHOF Belfast Classic in partnership with the Naismith Memorial Basketball Hall of Fame and the Metro Atlantic Athletic Conference. We are so excited to welcome eight fantastic teams to the city of Belfast.

“We look forward to welcoming new partners to our event and we are extremely thankful to our returning partners the Rory Foundation, Aer Lingus, Belfast City Council, Basketball Ireland, Velocity World Wide, STATS Sports and Chaka Travel as we showcase to the world the wonderful city of Belfast and what Northern Ireland has to offer.”

In addition to the Basketball Hall of Fame Belfast Classic, a series of ongoing community relations
events and initiatives will be held in the Belfast vicinity. Formal announcements surrounding specific
events and ticket information will be released at a later date.