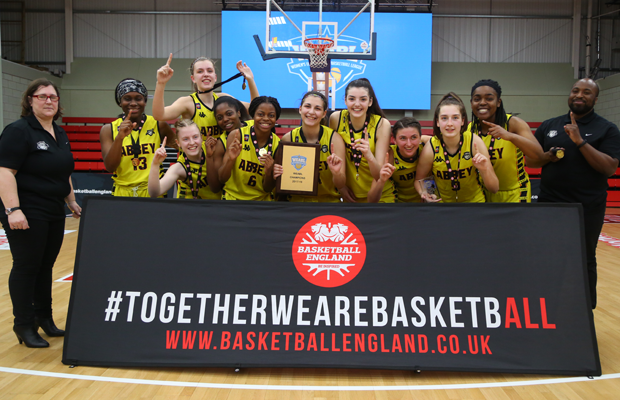 Barking Abbey became the first school to win the WEABL Championship on more than one occasion as they defeated Charnwood College 67-60 in Leicester, on Thursday.

Charlotte Ellmore impressed with a 24-point outing along with 3 assists and 3 steals to claim the MVP award.

“I mean it’s amazing,” she declared. “We have worked so hard to get here. Last year we fell, but this year I’m just so grateful for my team and I’m just so proud of us.”

Zoe Willis was also in contention having contributed 14 points, 10 rebounds and 5 assists in the win, while Megan Sheret hauled down 17 rebounds.

BA Head Coach Karen Burton added: “It is great for us to be back. We were obviously disappointed as we missed out last year. But we are just so happy, all the girls played really well.

“Charnwood made it tough for us but we really wanted to win this one. It meant a lot.”

Charnwood made a bright start as Ebony Horton and Holly Winterburn scored all of their side’s points as they edged ahead at 13-11 early on. BA finished the opening period stronger to lead 22-20 and stretched their advantage in the second as they moved 42-33 ahead at the break.

A low-scoring period followed after half-time as BA narrowly increased their lead to a double-digit advantage at 55-45 with Ellmore battling through an injury.

Charnwood cut their deficit to seven as they found their range from downtown but would finish at 21% from long range with BA able to keep their opponents at bay for the win.

“BA did a great job, they came out with a purpose whilst we were a bit flat,” admitted Charnwood Head Coach Krumesh Patel. “They rode that momentum all the way through; we were playing catch up from the get-go.

“We tried different things but they responded every time and made it very difficult for us.”

Winterburn led her side with 17 points as well as adding 6 rebounds and 3 assists as Charnwood suffered a third straight loss in the WEABL final.