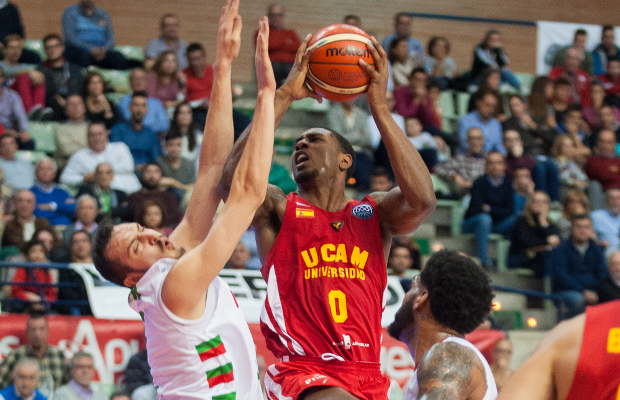 We take a look back on the month of November to see how the top Brits abroad fared – starting with those amongst the recent GB Senior Men squad.

GB newcomer Tarik Phillip has been competing in the FIBA Europe Cup with Hungarian side Szolnoki Olaj as they went unbeaten through November. Phillip had seven points, three assists and five steals in a 97-71 home win to start the month having also scored seven points in their two other victories. In the league, the rookie guard netted 10 points in an 85-58 win before Szolnoki (7-1) suffered their first league defeat.

Down 6 with 24s remaining? No problem for @gbbasketball. If you only watch one thing today, make it this! WOW. 👀🇬🇧🏀 #Hoopsfix #FIBAWC pic.twitter.com/rTrG62LK6s

Gabe Olaseni – who was unavailable for GB action, despite being named in the 15-man squad – had a 14-point outing on 6-of-9 shooting to help Fuenlabrada (7-2) pick up one of two victories in the month as they continue a strong start in Liga Endesa.

Ovie Soko netted a season-high in the ACB with a 20-point haul to guide UCAM Murcia (4-5) to an 82-71 home win after successive league defeats. It was three defeats in a row in the Basketball Champions League in November, but Soko did score 13 points in two of the three encounters.

Meanwhile, also in Spain, Dan Clark produced a double-double in a recent defeat to Joventu with 14 points on 7-of-9 shooting along with 12 rebounds, whilst also netting 14 points in the only win for Gipuzkoa (3-6) in the month over Unicaja Malaga. Luke Nelson is still waiting for his first win in his first season as a pro with Real Betis (0-10) suffering three more defeats in ACB action. The rookie dished out four assists in a loss to Andorra before scoring six points against EuroLeague side, Real Madrid.

Starting GB guard Teddy Okereafor had a season-high of 14 points in Greece’s A1, though Kymis (1-6) were beaten in their two league games. Andrew Lawrence produced a near triple-double for Sigal Prishtina (9-0) in Kosovo with 21 points, 12 assists and eight steals in one of four league wins in November, whilst netting 18 points in FIBA Europe Cup action.

Will Saunders is averaging 20.8 points per game as the second leading scorer in LEB Silver for Cambados (6-4). The forward had three double-doubles in the month with a scoring best of 21 points as he helped his side finish the month with four straight wins. Eric Boateng is still unbeaten with Saint-Vallier (10-0) in NM1, netting a season-high of 14 points along with nine rebounds in one of three wins in November.

Elsewhere, OG Anunoby averaged 6.6 points per game during November in the NBA with Toronto Raptors (13-7) with three double-figure outings including a season-best of 16 points in a win against Houston Rockets. [Read his thoughts on potentially suiting up for GB in the future HERE]

It was another strong month for Ryan Martin in Slovakia, scoring double-figures in all but one of seven games for Prievidza (8-6) with a best of 19 points on two occasions as well as two double-doubles. Jules Dang Akodo netted 19 points, including 9-of-10 free throws, along with six assists in a narrow loss as Fraport Skyliners II (7-5) claimed three wins from five in Germany’s Pro-B.

Also in Spain, in LEB Gold, Ashley Hamilton started November in style with a 24-point haul for Manresa (9-2) in one of four wins, while Rowell Graham had an 18-point haul, 5-5 FG, for Valladolid (7-4) as they picked up three wins. Jesse Chuku scored 11 points for Coruna (3-7) in one of three defeats in the month, while Ben Mockford had a best of seven points with Palma (5-6) winning two of their five games in the month.

In LEB Silver, Jamell Anderson netted a best of 18 points and also had an eight-assist game for La Roda (6-4), while Matthew Don had nine points and nine rebounds in one of three wins in the month for Myrtia (7-3).

Nigel Van Oostrum ranks second in assists in the Netherlands with 5.6 per game for Zwolle (5-3) having started November with seven points, eight rebounds and nine assists in a comfortable 25-point home win. In Iceland, Chris Caird scored a season-high of 20 points and had two 18-point outings to help Tindastoll (7-1) to four wins from four in the month.

There were just two games for Conner Washington in Denmark in November with the former Riders guard netting a best of 11 points as Naestved (5-3) dropped both league encounters. Fahro Alihodzic helped Leuven (1-8) to their first league win in Belgium with 11 points in an 81-77 home success having also netted 16 points during the month. Meanwhile, Jack Crook started November with a double-double in Georgia before netting 18 points as Rustavi (6-2) won all three games.