Around the NBL - Week 2 - Hoopsfix.com 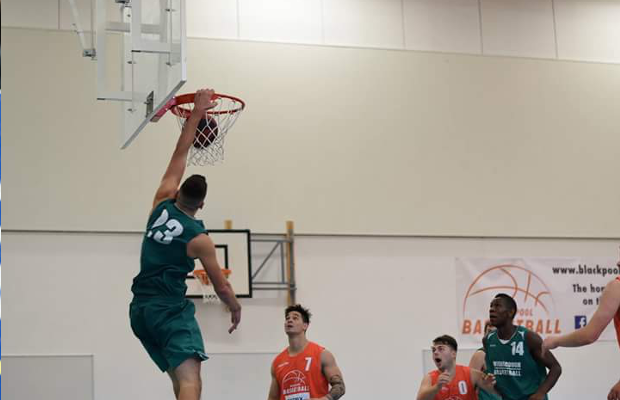 Manchester began the defence of their title with a comfortable win over close rivals, Lancashire, as they set up a decisive showdown with Derby Trailblazers for a place in the last four.

Donte Gittens led the way for Magic – in the absence of suspended Stefan Gill – with a 29-point haul as they get up and running for the season. The visitors led by 10 at the half before storming clear for the win.

For the second straight week, it was the away side who came up trumps in Pool 2 as Marc Steutel’s Northumbria side started with a win.

Malcolm Smith poured in an impressive 31 points to lead the visitors to victory with Fran Urli and Romonn Nelson combining for 35 in vain for Newcastle as they drop to 1-1.

Northumbria can secure their place in the semi-finals next week with a win against Bradford Dragons.

Loughborough opened their account for the season with a 10-point win over Leicester and will next face Hemel Storm to decide the winner of the pool.

GB U18 guard Sesan Russell top scored with 19 points with Alex Roberts close behind on 18, while Reiss Pinnock had 16 points along with seven assists.

The Riders trailed at the end of a high-scoring opening period before pulling away in the next two quarters en route to their first win.

Martyn Gayle and Carl Pearson had 19 points apiece for Leicester as their hopes of advancing ended.

Solent edged closer to reaching the semi-finals on Sunday after maintaining their unbeaten start with a 15-point win away at Reading.

The Rockets had their scheduled season opener with Kent Crusaders cancelled the previous day, and after narrowly trailing 43-45 at the break, the game slipped out of their reach in the second half.

Joe Tagarelli had another monster game for the Kestrels with 20 points and 16 boards with Chris Scarlett adding 18 points – Sydney Donaldson led Reading with 17.

Team Newcastle University won the competition last season, beating Kent Crusaders in the final – both teams earned promotion to D1 and are playing in the National Trophy.

Team Birmingham Elite followed up their opening victory with a convincing 93-61 success over Derbyshire Arrows to advance to the last four. Lacitis had a game-high 21 points in the win.

The opening game in Pool 2 saw a victorious London Greenhouse Pioneers claim a 67-59 win at home to Westminster Warriors with Dean Prosenica netting 20 points along with Dusan Neskovic.

Martelle McLemore exploded for 50 points to lead Thames Valley Cavaliers to a dominant 112-69 victory against Sussex Bears with the home side racking up 67 points in the second half to book their semi-final spot.

Essex Leopards bounced back from their opening loss last week to defeat Ipswich 58-87 on the road. After trailing at the end of the first, the Leopards used a 25-10 second period to take control and raced clear for the win.

Myerscough College opened the D3 league campaign with a 61-88 win away at Stoke-on-Trent Knights. They won every quarter en route to a comfortable victory with 21 points from Mate Okros.

Six D3 North games are scheduled for next Saturday with the D3 South season getting underway.

Derby Trailblazers II joined Team Derby at the top with an 82-89 triumph at City of Birmingham Rockets as Leighton Elliot-Sewell fired in 28 points, aided by a further 25 from Ashley Ugo.

Chelmsford Lions (1-0) opened their D4 campaign with an 80-76 victory over Kent Crusaders II (1-1) with a late run proving decisive, despite 27 points from Jonathan Brown.

Second Round to be played 22 October