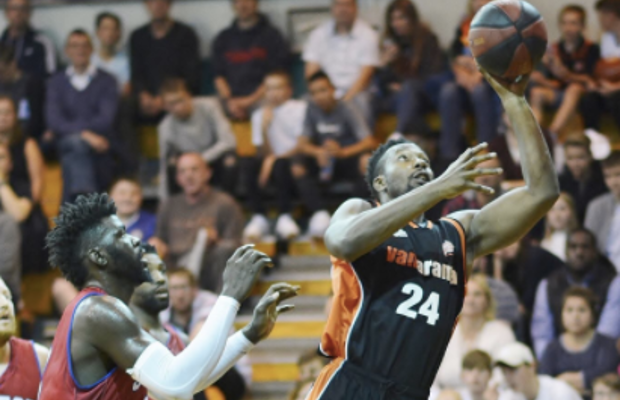 The National Basketball League (NBL) is back with the 2017-18 season tipping off with four different competitions over the weekend.

Our annual weekly round-up begins with National Trophy action – if we’ve missed anything or you have a story to share, email [email protected]

Derby opened their campaign with a convincing victory over a new-look Spinners side – whose partnership with Myerscough Academy ended this summer. Matt Ward-Hibbert top scored with 24 points, while new signings Kadeem Thompson (21) and Eric Benedick (19) combined for a further 40 points.

The home side poured in 31 points in each of the first two quarters as they pulled clear en route to a 32-point win to start the season. Lancashire were led by one of their own summer additions as Loick Pouale netted 24 points with player-coach Anthony Purcell adding 17.

Division 1 newcomers, Team Newcastle University, recorded their first National Trophy win with a hard-fought success on the road at Bradford Dragons. The West Yorkshire club led narrowly at the break in the absence of star point guard Marcus Gooding, but the Knights prevailed to take the victory.

Romonn Nelson had 21 points to lead the visitors with Rafi Saipe also putting up 21 in the losing effort for Bradford as the game finished with a high-scoring 25-25 final period.

Former BBL MVP Zaire Taylor fired in 30 points on his competitive debut for Worthing, but it was not enough to prevent a 22-point defeat away at Solent. American guard Herman Senior II flirted with a triple-double after putting up 24 points, eight rebounds and 12 assists to lead his new side to victory.

Taylor’s 30 points included 6-of-12 from deep with Brendan Okoronkwo going 12/12 from the line in his 27-point haul with Thunder giving up a costly 60 points in the first half.

Robert Youngblood made a winning start to his spell in charge of Hemel as they claimed a 12-point win on the road. Dave Ajumobi had 19 points to lead Storm to victory with Courtney Van Beest and Michael Darlow also in double figures with 11 and 10 points respectively.

For the Warriors, Elliott Sentence had a game-high 22 points as they were unable to build on a 14-10 opening period.

Team Newcastle University won the competition last season, beating Kent Crusaders in the final – both teams earned promotion to D1 and are playing in the National Trophy.

Nottingham Hoods will be looking to build upon their semi-final showing 12 months ago and they made a positive start with a 73-79 road win at Essex Leopards. David Watts netted 25 points in the win with Delaney Powell weighing in with 23 points.

Thames Valley Cavaliers also fell short at the last four stage last season and they opened their campaign with a dominant 71-103 success at Middlesex LTBC with Martelle McLemore firing in a 28-point haul.

Team Birmingham Elite made it three wins out of three for the away sides as they edged past Liverpool for a 71-76 victory behind 26 points from David Stevic ahead of next week’s home clash with Derbyshire Arrows.