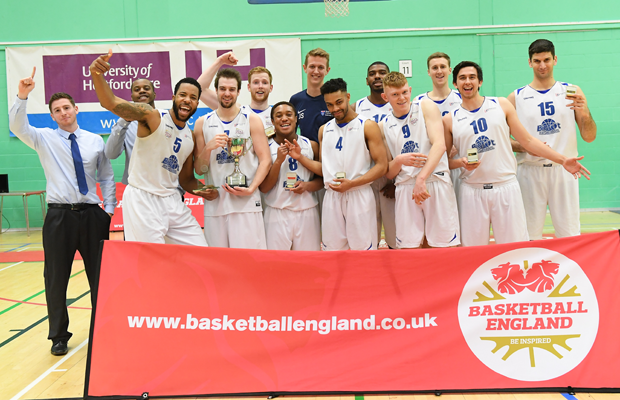 Team Newcastle University pulled out a 77-65 win over Kent Crusaders to claim the 2017 Patrons Cup on Sunday afternoon at Herts Sports Village.

It marks another title to add to their cabinet after a quick ascension to Division 2, having only entered National League two seasons ago.

Rich Austin stuffed the statsheet to pick up MVP honours, having 21 points, 10 rebounds, 6 assists, 2 steals and 2 blocks, whilst Jack Beresford added 17 off the bench on 8 of 9 shooting, and Frank Urli with 14 points and 6 assists for Team Newcastle.

Though it was Crusaders who got the better of the early stages of the game to go up six, Team Newcastle finished the first period on a 13-0 run to take control and would hold on from there. Kent always remained in striking distance, but a deep dagger three pointer response – as they had been doing all game – from Mark Elderkin for an 11 point cushion with 1:46 to play seemed to seal Crusaders’ fate.

“I thought it was an outstanding performance,” Hewitt continued. “Offensively we had to be at our best as Kent are always tough defensively, but defensively, to hold that team to 65 is testament to how we played and how much we wanted to win.

“Once we went into that last four minutes, of more of a ball movement oriented team, moving the ball quicker against the press that helped us massively and just pushed us over the edge. Every time it got a little close that’s what we looked to do, just move the ball a little more, it worked for us, and stopped them from putting the press on to give us a little more of an advantage.”

RJ Eytle-Rock led Kent with 23 points, whilst Dan Akin and Amin Adamu adding 10 points a piece, with the former adding 15 rebounds, as Crusaders dominated the glass 48-25.

“It was a disappointing day for us. Congratulations to Newcastle I thought they deserved the game today for the way they played. They shot it well from the outside and made some huge shots down the stretch. I thought we could have been a little better moving the ball and playing as a group both offensively and defensively. We will have to learn from this and use it as a motivation for the rest of our league campaign.”