GB U20 Women Beaten by Czech Republic, Will Play for 7th - Hoopsfix.com

GB U20 Women Beaten by Czech Republic, Will Play for 7th 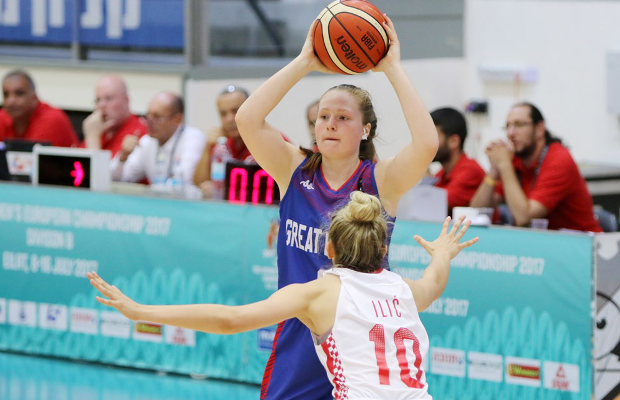 Great Britain Under-20s will play for seventh place at the European Championships after falling to a 77-71 loss against Czech Republic in Eilat on Saturday.

Chema Buceta’s side missed out on the semi-finals with their two wins taking them into the 5th-8th classification round for the second summer in a row.

However, they fell to a fourth consecutive loss despite a really strong spell in the third and will battle the tournament hosts, Israel, for seventh.

Georgia Gayle returned from missing Thursday’s game with a 20-point haul along with seven assists, while Abigail Johnson posted a double-double of 16 points and 13 rebounds.

Gayle scored her side’s first five points in an even start before GB took their first lead from the foul line at 8-9. Czech Republic went on a 7-0 run late in the first to move 19-13 ahead with Abigail Johnson already harvesting eight rebounds for GB.

The deficit quickly grew to 11 points in the second period, but GB rallied with a 13-2 run capped by another three from Gayle to level at 29-29 as the captain hit double figures.

Another strong finish from the Czechs saw them take a 40-33 advantage into the half-time break.

Molly Taylor netted a three on the first possession of the second half and her second capped an 8-0 run as GB took a 44-46 lead. However, Czech Republic were quick to restore their lead with yet another strong finish allowing them to move 63-56 ahead by the end of the third.

A 7-2 start to the final period pushed the gap beyond double figures before Gayle reached 20 points with her third 3-pointer. GB finished with a flourish to apply late pressure, but fell short.

GB U20s play their final game tomorrow against Israel in the battle for 7th place.