Dani Lozzi: From self doubt to Division 1 - Hoopsfix.com

Support
Home / Features / Dani Lozzi: From self doubt to Division 1

Dani Lozzi: From self doubt to Division 1 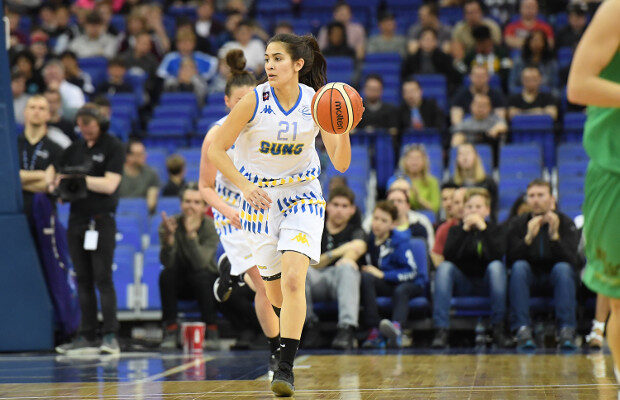 Dani Lozzi is a junior international, a double winner in the WBBL with Sevenoaks Suns and will soon embark on her college career in the States.

However, the last few years have been far from an easy ride.

From struggling to find enjoyment and lacking belief in her own ability to revelling in a WBBL Playoffs title triumph at The O2 Arena – just days before her 18th birthday – as well as signing for the University of Vermont.

“Three years ago, I was nowhere near the level I am now,” Lozzi admits.

“I didn’t enjoy [playing in the WBBL at first], going up against bigger and better players.

“But my confidence soon shot up – any time I would score or get an assist or a steal it helped me think I was able to play at this level.

“The WBBL is good for young players to grow and get better, which is important.”

The development has been vast, and one person who certainly had no doubt was Suns’ Head Coach, Len Busch.

The play-caller handed Lozzi a WBBL debut at the age of 15 and saw the defensive specialist continue to grow in her role on the team.

“Len has had a big influence [on my career] – he believed in me when I didn’t,” she says.

“He has always seen the potential, always pushed me and helped me get better.”

Sevenoaks’ talented blend of youth and experience has paid dividends too with the likes of Cat Carr, Anne Pedersen and Ta’Yani Clark all having positive impacts on the next generation.

The Suns enjoyed their greatest season in the WBBL, lifting the Trophy and Playoff titles as well as finishing third in the league.

“It was kind of a weird feeling like this is it – end of the season and end of our careers with Sevenoaks.

“Before the season, none of us thought we could do what we did and we were the underdogs throughout.

“It was an amazing achievement and we had a special group.

“We didn’t have the biggest of squads, but we were a closely-knit group who got wins by hustling, gritting it out, fighting back and believing in each other.”

The next step for Lozzi takes her Stateside to the Green Mountain State.

Busch helped put her in contact with UVM through his association with Head Coach Chris Day – who was previously on the coaching staff at UPenn at the same time Len’s daughter, Renee, was in attendance.

With limited offers, it seemed a straightforward choice for Lozzi until late interest emerged from Auburn University.

“I didn’t have that much interest a first, a couple of offers from D2, but I was getting a little impatient,” she explained.

“Len knew the Head Coach at UVM and they needed a point guard so I ended up going to visit.

“But then Auburn got in touch and I had to try and decide between the two.

“There’s quite a big difference, but I value game-time and got a different vibe from UVM.

“A mid-major so there’s less pressure as such and I feel it’s a better fit.

“It’s incredible to think through my basketball, I’m getting these opportunities and it’s a really big thing for me and my family.

“The coach has already told me what he expects of me and I’m hoping I can help the team grow and continue to improve my own game.”

Lozzi’s planned departure to the US has been delayed with her recent call-up to the initial GB Under-18’s squad.

The point guard’s previous international experience came with the England Under-16’s at the 2015 European Championships, when they endured a frustrating Division A campaign that resulted in relegation.

“It wasn’t a positive experience for me,” Lozzi recalled.

“We lost every game so it wasn’t easy, but we believed we could compete and were not far off.

“Representing my country is a priority and I’m really pleased with my latest call-up.

“I’m looking forward to the camp and hope to make the final 12 as it would also be good to get a couple of extra games in before next season.”

Lozzi’s call-up comes off the back of her strongest season in the WBBL, featuring in every game as well as playing for the under-18’s – to take her total number of appearances in the top-flight to 54 games over three years.

The rising teen displayed her all-round contributions, particularly on the defensive end, recording a near quadruple-double at the U18 Final Fours – and has come a long way since starting out playing basketball at 12.

“I hated it,” she said of her early memories at Sevenoaks.

“I used to be dragged to training, but then it started to grow on me and I love the sport now.

“It’s my passion and that massively derived from my team-mates that helped me.

“I owe a lot to my coach and my team-mates because I couldn’t have got to where I am without them.

“I’m so excited for the next stage of my career.”

Hoopsfix wishes Dani all the best in her career at the University of Vermont!