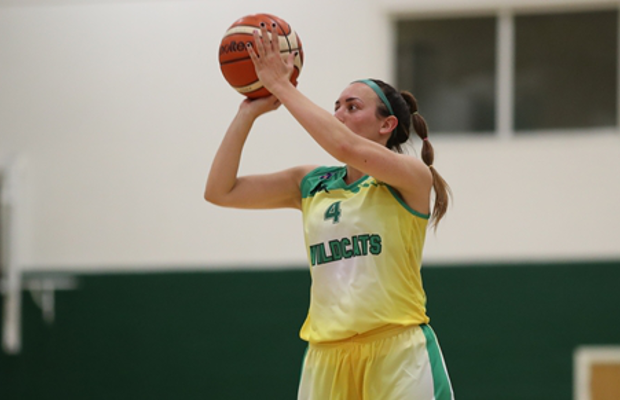 Siobhan Prior has her sights set on winning more silverware with Nottingham Wildcats after agreeing to return for the 2017-18 campaign.

After handing in her notice at work, Prior will be able to focus solely on another season with her hometown club having made her GB Senior debut last month.

Prior was named to the Molten WBBL All-British Team of the Year last season, averaging 12 points, 3.4 rebounds and a league-best 2.8 steals per game.

“Getting involved with GB again has made me think that I might not have that much longer left so I want to make the most of my career while I can,” Prior told Hoopsfix.

“I’m trying not to think too far ahead, but I’m beginning to cling onto every last game because you never know when it will end.

“We always want to win everything – it would be amazing to defend our title again and the next step would be to win a showpiece final.”

The Nottingham-native progressed through the junior ranks, representing her country at every age group and made history after being selected for the first-ever GB Under-20’s squad in 2006.

Prior had just completed her freshman year at Loyola University prior to the call-up and would return for a second summer with the Under-20’s, where they achieved a third place finish in Lithuania.

Fast-forward a decade and the opportunity to finally put on the Senior jersey came on a recent trip to France.

So much positivity . . . So much pride #GB 🇬🇧❤️🌹 pic.twitter.com/YQAa7qQqG5

A lot has undoubtedly changed in that time; including the personal costs of representing your country, but one familiar face remained in Vanessa Ellis.

The Sheffield Hatters play-caller was part of Chema Buceta’s support staff in Le Temple-sur-Lot and was also in charge of the GB Under-20’s back in 2006-07.

“It was a nice comfort having Vanessa there again,” Prior said.

“I remember my time with the Under-20’s well and it was a really good experience.

“I hadn’t played a lot in my first couple of years in college – so was able to remember my confidence as such with GB.

“We had a talented group in both years – I’d played with them since a young age and always felt like we were there or thereabouts.

“We won a bronze medal [in 2007], but being young and wanting to win so much, I probably didn’t enjoy it as much as I could have.”

The time is now

Prior was unavailable for the first GB Senior camp in May due to work commitments before being one of five new additions to the squad for June. And the 30-year-old admitted to being surprised at the call-up.

“It was very unexpected, but a nice surprise at this stage of my career,” she said.

“I played in all of the age groups, at Senior level for England and when you are younger, it becomes a big part of basketball with the international summer following the season.

“The GB Senior camp in 2009 was the last time I was involved with the National Team and I’d just put it out of my head.

“Sometimes when the lists come out, you think maybe I could have been part of that then other times not.

“If I’m honest, I didn’t ever really feel ready until at least the last couple of years.

“I’ve been concentrating on other things and the Wildcats so it was a surreal feeling being selected.”

GB took on France A in a 3-game series and produced some encouraging performances in testing conditions, despite failing to pick up a win. Prior went 4-of-4 in a 12-point haul in the middle clash in the series and was filled with pride as the national anthem rang out before each game.

“I’m very patriotic so it was a special moment.

“I felt a lot more calm than when I was younger – I remember being nervous for weeks and shedding tears before some camps,” she laughs.

“I put a lot of pressure on myself, but the last few years I’ve felt at ease playing.

“I was ready and excited this time and it was so different to what I’ve known before.”

Prior earned a call-up following on from another strong season in the WBBL; helping lead Nottingham Wildcats to a second league title in as many years.

Having played in the WBBL since its inception, Prior has established herself as one of the league’s most consistent performers and looks back on her time at Loyola as a pivotal moment in her basketball development.

An adjustment period was needed to adapt to the college game as Prior admits to having been ‘a small fish in a big pond’ despite being ready for the challenge.

“It was a massive learning curve,” she recalls.

“I was basically just a shooter, but Loyola helped me understand the game on a bigger level and value a lot of different things.

“I became more of an all-round player and knew that I’d never player unless I improved defensively.

“You get knocked back a bit and even though you’re ready for that challenge, it doesn’t stop it hitting you hard.

“Sitting on the bench was tough and it’s more of a mental education at times.

“I proved to myself that I can do it and at that level and most importantly, I was able to find confidence in myself for the first time.”

After a difficult first couple of years with the Greyhounds, Prior started 29 of 30 games in her senior year and led the team in scoring with 12.8 points per game with a career-high of 22 points on three occasions during that season.

Out of college, Prior followed the path to Europe, although things didn’t go according to plan with contrasting experiences in Greece and Slovakia either side of a return to Nottingham.

The chance of playing on a top-flight side in Greece alongside a former WNBA champion in Jennifer Derevjanik was enticing, but the club’s financial difficulties proved damning.

“I loved the place, was comfortable with the standard, but after a few weeks, we started to realise money-wise there was a problem,” Prior explained.

“We were not being paid and basketball started becoming more of a chore and it wasn’t a positive experience.”

Prior promptly returned home to play out the English season with Nottingham before heading out to Slovakia, though this time injury would dampen the experience. Overseas offers began to dry up and Prior decided to rebuff any temptation including the chance to play in the Spanish second division.

“In my second year out of college, it was hard to get offers not being amongst the GB set-up.

“I always knew I had the Wildcats to come back to and went on to get my teaching degree.

“The offers in Spain are probably the one thing I look back on and think ‘should I have done that’.

“I do still get the odd offer with messages on Facebook, but I’m in a different place now and I’m really happy.”

Prior’s love and passion for the Wildcats has never wavered and the club captain puts the onus on herself to encapsulate the family feel within the organisation.

The East Midlands club are becoming a dominant force in the WBBL having secured back-to-back league titles, although they now have a 0-5 record in WBBL finals following their recent demise at The O2 in May.

Ashley Harris – the Molten WBBL MVP for the 2016-17 season – has already stated her intentions to return for a third season with Prior stressing the importance of the club’s environment, whilst aiming to inspire the next generation coming through.

“Ashley loves it here on and off the court – she’s found a home and wants to return,” Prior confirmed.

“The team ethos is important here and we struggled a bit with some new players coming in this year.

“As I’ve got older, the thing that has helped progress my own game, is knowing it’s not for me, but the whole club especially the younger players.

“I’m playing for a bigger reason, giving those girls something to look up to.

“That’s my biggest motivation even though I really love playing and love winning.”

The season ended in disappointment with the aforementioned Playoff final defeat with Prior visibly upset as leg cramps forced her to sit out the remaining eight minutes as Sevenoaks Suns completed a historic double with a 70-61 triumph.

“It was really frustrating,” Prior said of her injury.

“The main thing about me people will tell you is it’s not skill or athleticism but the will to want to win and doing anything it takes.

“Losing [the playoff final] the year before, we felt we had a point to prove coming in.

“It was heartbreaking sitting on the sideline knowing I couldn’t do anything to help my team.

“The momentum changed in the second half and things didn’t go our way, but I guess we’ll have extra motivation for next year.”

You can check out Prior’s blog ‘Shevy Speaks’ here.