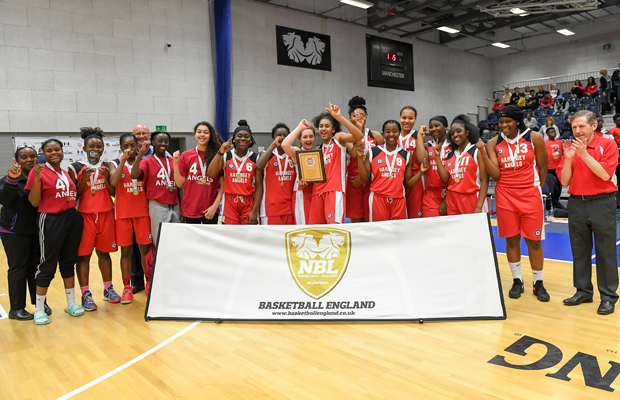 GCA Haringey Angels claimed the Under-16 National Title with a 52-46 win over Ipswich Basketball Club in the final on Sunday in Manchester.

GCA Haringey Angels’ captain Teresa Da Silva (10) and the MVP Mariam Matovu (12) saw their side through to the win, being ably supported by Jolicia Cadogan (9), and 8-a-piece from Jade Guidolin-Duncan and Aaliyah Samuels-Campbell.

“They didn’t give up and scrapped hard on defence, like they’ve always done. We had a bad first quarter, but we then knocked them down and got the job done so I’m pleased.”

Ipswich skipper Ester Little scored a game-high 20 for her side with 11 rebounds, but it wouldn’t be enough.

Semi Final 1
Ipswich vs West Herts
Ipswich got a 72-65 win over West Herts Warriors to book their place in the final.

Ipswich were led by a monster 32 point, 19 rebound double double from Ester Little, as their side dominated the glass on their way to 90 rebounds.