GB Battle Back to Beat Argentina in Tournament Opener - Hoopsfix.com

GB Battle Back to Beat Argentina in Tournament Opener 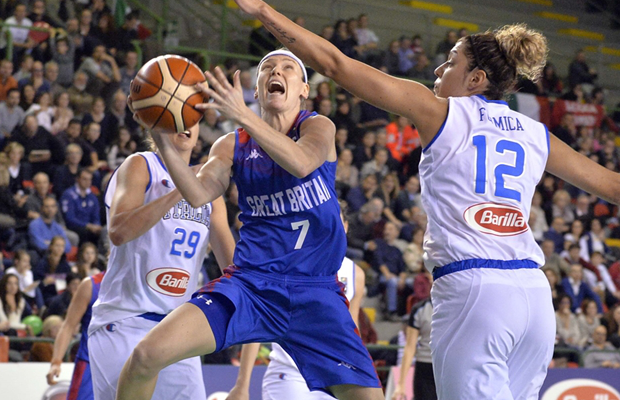 Great Britain’s Senior Women secured an impressive 57-56 victory over Argentina in their opening game of a tournament in Minsk, Belarus.

Having narrowly lost 64-62 in a friendly against Belarus on Monday, GB bounced back and overturned a 10-point deficit in the fourth to earn their first win of the summer.

“This was a very interesting game for us, to keep it going as a team. Argentina played very well defensively and forced us to find solutions to be able to score,” commented Head Coach, Chema Buceta.

“Of course we made mistakes, but mistakes are part of the show and we have to learn from them.

“In general, our defence was good and although winning wasn’t the main objective here, we were losing by 7 points with under 5 minutes to go and the team still believed they could win, having the self-confidence to do this.

“The most important thing was, that out of all the players available, they all showed what they can do and keep this team moving.”

Janice Monakana top scored with 12 points from the bench, including seven in the fourth, while Azania Stewart was also in double figures with 11 points with Chantelle Handy adding eight points and 10 rebounds.

VICTORY for @gbbasketball! Big defensive stop secures a 57-56 win against Argentina to open the tournament in Minsk! 🇬🇧🏀 pic.twitter.com/oqLfO9zvOV

GB opened with first two scores and led 9-6 at the mid-point of the first quarter as Handy fired in the first triple, but a buzzer-beater from Ornella Santana put Argentina 13-14 ahead at the end of the opening period.

An and-1 from Stewart put GB back ahead before a 7-2 response from Argentina. GB finished strong to produce a 6-0 close as they gained a 33-29 advantage at the half-time break.

Argentina moved back ahead in a low-scoring third quarter as they held GB to just five points in over nine minutes of action.

Stewart added a late score to move into double figures before Melita Emanuel-Carr beat the buzzer with a mid-range jumpshot as GB headed into the final quarter down 42-45.

The deficit increased to 10 points as the game began to slip away from GB with a 7-0 run from Argentina in the first five minutes of the fourth.

Monakana stopped the rot with a three and that sparked GB into life with Collins adding five points in quick succession before a forced turnover led to an easy score from Monakana to tie the game at 52 with 2:56 to go.

Handy fired GB ahead from downtown to make it 55-52 to cap a 13-0 run, but back-to-back baskets from Argentina saw them re-gain control heading into the final minute.

Monakana hit back with a pair of free throws to put GB ahead by a single point at 57-56 and a huge defensive stop secured the victory.

GB 🇬🇧 57 – ARG 🇦🇷 56 @gbbasketball get the come from behind WIN in the first game of the Belarus NT Tournament! #GBballers

Coach Buceta went with a starting line-up of Collins, Vanderwal, Emanuel-Carr, Handy and Stewart against the 16th ranked Argentinians, who have brought a strong roster to Minsk.

Macarena Rosset led the South Americans with a game-high of 18 points.