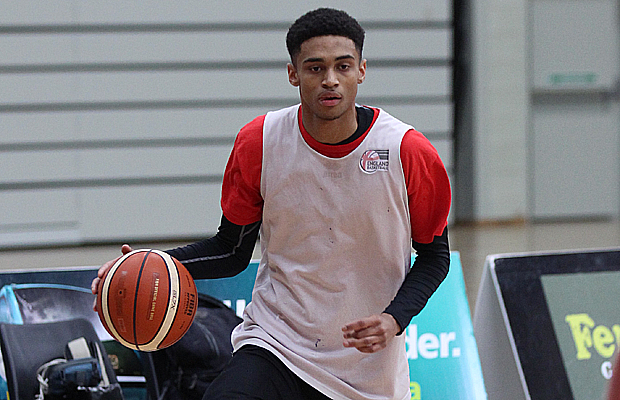 Following this week’s second National Team training camp, Head Coach Alan Keane has whittled his England Under-18 squad down to 18 players who will go forward to the inaugural Great Britain selection camp in June ahead of the European Championships this summer.

The players shall now vie with their Scottish and Welsh counterparts in two months time for the honour of representing the first ever Great Britain Under-18 squad following the official British Basketball Federation affiliation to FIBA in October last year.

“This camp was really positive in many ways,” said Keane. “The commitment and sacrifices made by all players and their families to be there coming off of long domestic seasons for all involved is very commendable and appreciated.

“This group of players really showed me a desire and passion to be a GB player and a work ethic to match. Between the camps we as a staff invest a lot of time in developing the programme but most of all developing strong relationships with all players.

“This camp allowed us to build on that. We had six players on court this camp that were not available for camp 1. With three coming from the US and one from Greece combined with 15 returning players from December camp the tone was clearly set from the first of six practices.

“The players were encouraged to show us more of where their strengths lay while also demonstrating a willingness to stay out of their comfort zone over the three days. We as a staff are very pleased with what the players delivered and excited for the future for this team.”

There are two players in the mix who have not been involved with the National Team program before, US-based Nathan Robinson – son of former BBL player Mark Robinson, and Peter Strigas, who plays for Greek powerhouse Olympiacos Piraeus.

The squad does not lack experience with six of last year’s England Under-18 squad from the Europeans remaining involved this year; EABL North Conference Player of the Year Zion Tordoff and All-EABL team members Brian Amabilino-Perez and Micah Savery-Richards, along with Josh Edwards, last year’s second leading scorer Nelson Boachie-Yiadom and Romario Spence.

Meanwhile, Hosana Kitenge, Pierce Maslen, Jacob Round, and Josh Ogundele all remain in as year young players, having represented the England Under-16s with Keane last summer at the Division B European Championships.

The players hoping to make the final 12 are as follows: