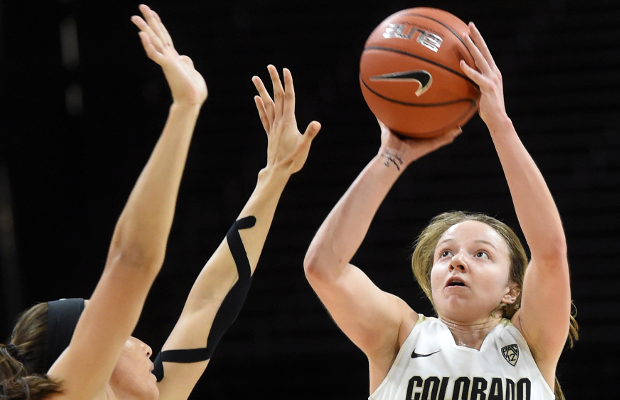 Kennedy Leonard has been named to the All-Pac 12 First Team after an impressive season at Colorado University.

The sophomore guard has scored almost 500 points on the season at 17.1 points per game (ranked fourth in conference), whilst handing out 150+ assists (second).

Leonard netted a career-high 31 points in December in a win over Colorado State and also recorded two double-doubles.

Recently, the 1996-born guard came up clutch with a dagger three to help the Buffs earn a win over rivals California.

Leonard was a newcomer to the GB set-up last summer and starred for the Under-20’s at the European Championships in Podgorica, Montenegro.

The Texas native averaged a team-high 12.7 points and 3.5 assists per game with a tournament-high of 24 points in the opening game.

Leonard has been playing alongside Eleanor Jones this season with the former Charnwood forward in her first year.

CU are seeded 10th in the post-season Pac-12 tournament and face Washington State in their opening game.