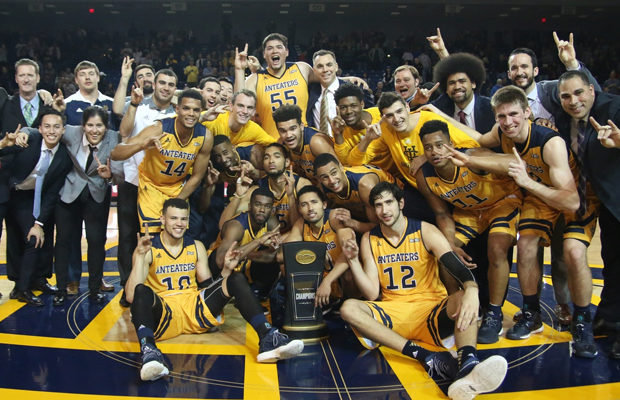 UC Irvine’s Luke Nelson was not going to be denied on Senior Day as poured in 29 points to lead the Anteaters to a 79-49 rout of UC Davis to clinch the Big West Conference regular-season title and the league tournament’s No. 1 seed before 4,384 at the Bren Events Center Saturday.

The former Great Britain Under-20 hit a career-high seven threes in 11 attempts, for his sixth 20-point game of the season, boosting his UCI career record to 247 threes and has 1,467 points for eighth all-time in the Anteater record book as he moves closer to No. 7 Kevin Magee (1,475).

Saturday’s game marked the first time in the 48-year history of the Big West that two teams met on the final day of the regular season to determine the outright champion and with the victory, Nelson and UCI have won outright or shared the Big West regular-season championship three of the past four years.

And looking ahead to the Big West Tournament, Nelson emphasised the need to take it one game at a time.

“There’s only one guaranteed game right now,” he said.

“I’ve been through it all, I’ve won all three games, I’ve been to one and lost the second one, twice, and that’s really painful. I’ve got to make sure as a captain that my guys are locked in and they know it’s one game, and that’s it. No matter what happens, it’s one game. We can’t be looking forward to the next team or the team after that, we’ve got to be focused on the next game.”

Nelson and the top-seeded Anteaters (19-13, 12-4) will face No. 8 seed UC Riverside (7-20, 5-11) Thursday at 6:00 p.m. in a Big West Tournament quarterfinal at the Honda Center in Anaheim, and he isn’t quite ready to reflect on his accomplished college career just yet.

Luke came to Irvine and has done nothing but fill up the record books with his name.