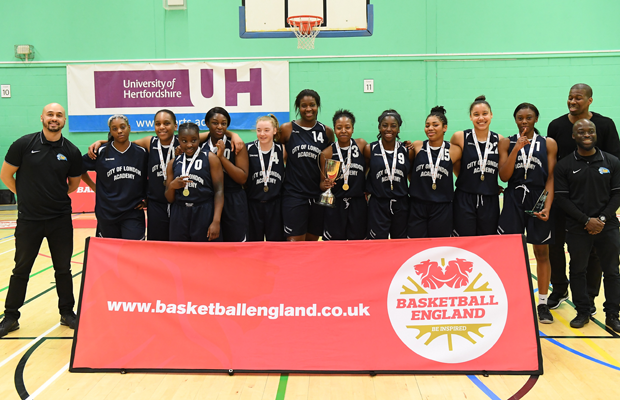 Southwark Pride defended the Under-18 National Cup with a 49-40 victory over Charnwood College Riders in the final on Saturday afternoon at Herts Sports Village.

Toyosi Abiola picked up MVP honours with 19 points and 7 rebounds, as Pride defended their Junior title and added it to their Senior National Cup win from January.

Abiola was the only player in double figures for the winners, with Megan Haines having 8 as their second leading scorer.

“It feels really good,” Southwark Head Coach Jackson Gibbons said after the game. “It wasn’t the greatest game today, I think both sides could have represented themselves better with the type of basketball that we played, I don’t think it was the best game between Charnwood and Southwark pride, but sometimes you have to grind out a win and I felt that out girls found a way.

“I have to give credit to Charnwood, they made it extremely difficult, it was a tight game until the very last second so hats off to them I thought that they played a great game.”

A slow start from both teams saw just two points scored total in the opening 8 minutes of the game, and had it not been for a Jessica Eadsforth-Yates three with 3 seconds remaining in the first quarter, Charnwood would’ve had a scoreless period.

Both sides got going in the second period, as Southwark held a three point lead at the halftime break. A dominant third period, where the Pride held Charnwood to just four points whilst scoring scoring 14, opened their lead to 13 heading into the final quarter where they would pull out the win.

“I”m really proud of my team for getting here, it’s been a lot of hard work so I’m really excited. I think we made it more difficult for ourselves, but a big shout out to Charnwood they’re a really tough team and they play hard all the time. We played hard today, it was a good match up.

“It means so much to me (to win with her teammates who are in their final year at the club together) they are who I started basketball with four years ago so it’s been an amazing journey to share with them.”

Charnwood were led by 12 points from Anna Popovic, whilst Megan Jones had 10 rebounds to go with her 7 points.