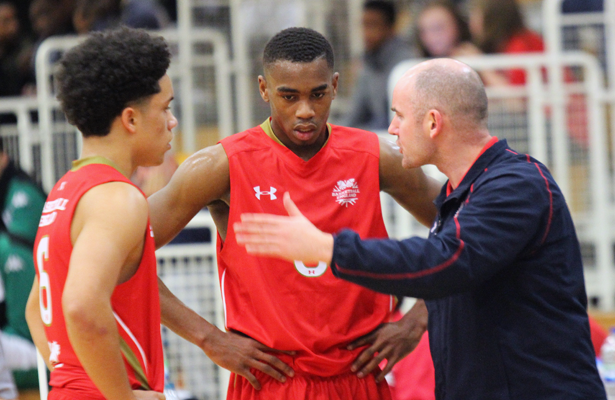 It will be Worcester versus England and Ireland against City of Edinburgh in the Haris Memorial Tournament 2016 semi-finals after all advancing on Day 2 at the Amaechi Basketball Centre in Manchester on Wednesday.

Magic led after the opening period, but a flurry of threes in the second quarter saw Worcester take a lead they wouldn’t relinquish the rest of the way. They pulled away for good at the end of the third quarter, taking a single digit lead to 21 points in a little over 5 minutes.

Paul Durkee led Worcester with 22, Jack Zimmerman had 17, whilst Jordan McAllister finished with 9.

Michael Anumba top scored for Manchester with 17, Kaiyem Cleary had 14 to join him as the only other player in double figures.

Nova’s late rally saw them get within four with less than 5 minutes to play after knocking down a clutch three, but Edinburgh held their nerve down the stretch, knocking down their free throws.

Ryan Armour and Kyle Jimenez led Edinburgh with 21 each, with Chris Jackson contributing 13.

Javier Fernández Carrilo had 20 for Nova, whilst L.J.J Lehtinen finished with 15.

It was by no means pretty, with a slow start from both teams seeing them combine for just 19 points in the opening period, with England up 12-7. In the second period England began to find their flow, opening up a double digit lead and though Derby fought back in the third to get it back to 5, England pulled out their second win.

Brian Amabilino-Perez finished with 18 for Derby, Leyton Elliott-Sewell had 12 and Sam Coles 9.

Sean Jenkins led Ireland with 22, Cian Heaphy had 13, whilst Adam Donoghue and Sam Walsh joined them in double figures with 11 and 10 points respectively.

Worcester jumped out to an 18-4 lead in the first five minutes and never looked back to stay undefeated in the group stages.

Francisco Ortega Fernández and L.J.J Lehtinen had 10 points each to lead Nova.

The absence of Kaiyem Cleary for Manchester showed, as they ran out of steam, lacking depth to be able to compete with Edinburgh who converted on multiple occasions from beyond the arc.

Michael Anumba in flight for Magic at the @HarisTournament #Haris2016 pic.twitter.com/EiNrMxbtgh

England Under-18s vs Ireland Under-18s
The shock result of the day saw Ireland dominate the second half for a 64-91 win over England.

Ireland led the majority of the contest, but were up just five at halftime, before crushing England with a 29-16 third period to lead by eighteen heading into the final period. A charged up Ireland side dictated the tempo and did not let up the rest of the way to cruise to the upset win.

Adam Drummond led Ireland on his way to 19 points, Cian Heaphy finished with 18, whilst Sean Jenkins had 17 and Donal Ring 10.

Zion Tordoff continued his offensive charge in the tournament, leading England with 17, Micah Savery-Richards had his best outing so far with 14, whilst Eisley Swaine and Kayne Henry-McCalla finished with 8 each.

It marked the second time in three games Derby reached the century mark, all whilst holding Sligo to just 12 points in the second half, with a three point third quarter.

Callum Singleton led Derby with 23, Leyton Elliott-Sewell had 21 whilst Brian Amabilino-Perez finished with 19 – as he leads all scorers in the tournament so far.

Luke McLoughlin had 10 to lead Sligo, with Matthew Donnellan adding 9.