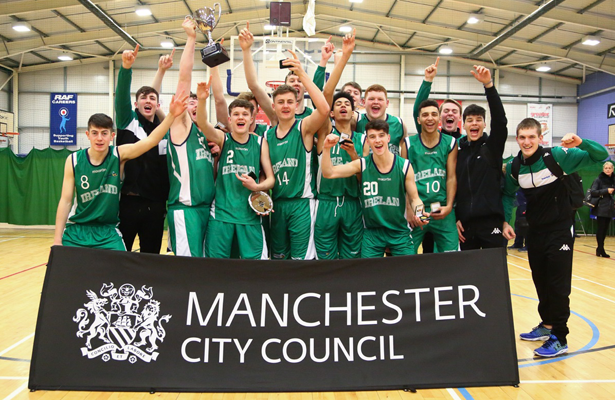 It was Ireland who claimed the 2016 Haris Memorial Tournament title, with a 91-103 victory over Worcester Academy in the final on Thursday evening at the Amaechi Basketball Centre in Manchester.

Sean Jenkins picked up MVP, finishing with 24 points, 9 rebounds and 4 assists, but was ably backed up with contributions from across the board; Adam Drummond (24 points, 9 rebounds, 9 assists) and Cian Heaphy (15 points, 8 rebounds, 11 assists) both flirted with triple doubles, whilst Donal Ring had a 15 point, 10 rebound double double.

“It was a great tournament first and foremost, huge thanks to everyone that organised it,” said Ireland Head Coach Conor James reflecting on the win.

“We progressed phenomenally throughout the tournament. Our squad is at 18 at the moment and it’s been great to get everyone in and out the rotation and still progress all the same. To bounce back from our opening loss and performance to get better and better each time was incredible to watch.”

Ireland looked to stamp their authority on the game early, jumping out to a 19-5 lead in the first five minutes, moving the ball well and converting from beyond the arc.

Worcester’s Quest Ellis, who finished with a 28 point, 11 rebound and 10 assist triple double, was the only factor keeping them in the game in the first half as he poured in 20 points across the opening two periods.

“We had done some scouting on Worcester,” James added. “We know exactly what they were like, Quest is a brilliant player, he really controlled the tempo of the game and after our first initial run he was doing the damage.

“We just tried to block the key to limit what he can do and when they came back, I knew that if we were able rebound properly and continue doing what we were doing all game, getting out on the break and doing what we’re good at, we’d be able to close out the game.”

Worcester refused to go down without a fight, getting within 4 with a little over a minute to play, but Ireland knocked down their free throws and were able to pull out the win. 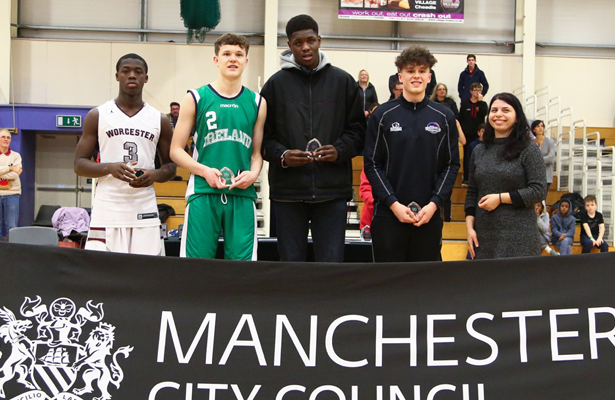 England vs Worcester (semi-final)
Worcester Academy held on for a 91-88 win over England Under-18s to book their place in the final.

Kayne Henry-McCalla’s three at the buzzer bounced off the rim to seal England’s fate, in a game that featured multiple lead changes.

Looking to bounce back from their Wednesday defeat against Ireland, England came out firing and struck first to hold the early lead before a flurry of threes to end the half saw Worcester hold a five point lead at the break.

Josh Ogundele and Caleb Fuller – who led England with 18 points each in the game – carried England in the third quarter to take a two point lead into the final period, but there it was Worcester who made plays early to regain control. England chased, and a huge Pierce Maslen three brought them to within 1 with a little over a minute to play, but they would be unable to convert from there and capitalise on Worcester missing free throws.

Kayne Henry-McCalla and Zion Tordoff added 14 points each for England.

The Irish side overcame a tournament-high 39 points from Kyle Jimenez on their way to the victory, as both sides hit huge shots down the stretch in one of the most exciting games of the day.

Ryan Armour added 13 for Edinburg, with Alexander Ferguson and Findlay Wood having 8 each.

England pulled away for good in the second quarter, leading by as many as 16, as they finished the tournament with a win.

Kayne Henry-McCalla led England with 19, Zion Tordoff had 18 and Eisley Swaine 16, including some key buckets in the fourth.

“We have just started the process with this group,” England Under-18 Head Coach Alan Keane commented.

“We have 24 players left in the squad and the Haris tournament gave us a good opportunity to assess these 12 players. The focus is to build chemistry and unity within the squad both on and off the court and grow together. We took some steps forward and identified some positives while also getting a better understanding of where we can go with this group.

“We have a lot of room to develop and progress and I am excited by the challenge to grow the team and get the best out of each player. From this moment forward until the next camp a lot of work, communication and support by the national team staff, the 24 players and their club/school coaches and all working together is very important and critical to our development as a national team and ultimately the development of each individual player.

“Lastly, a huge thanks and congratulations to the organisers and support members who made the Haris Tournament a fantastic occasion once again.”

Ryan Armour led Edinburgh with 23, whilst Konrad Kantorski and Kyle Jimenez finished with 19 each.

It was just a six point game at halftime, but a dominant 22-6 third period blew the game wide open as Manchester cruised the rest of the way.

Nova vs Sligo (7th Place Playoff)
Nova School claimed seventh place with a comfortable 78-34 win over Sligo All Stars for their first victory of the tournament.

It meant Sligo finished without a win, as they were led by 12 points-a-piece from Matthew Donnellan and Luke McLoughlin.

Derby Trailblazers vs Nova
Derby survived a scare from Nova to pull out a 74-69 win and advance to the fifth place playoff.

It was Nova who were on top early and led for the majority of the game until a quick 5-0 burst, punctuated with a dunk from Brian Amabilino-Perez saw Derby take the lead by 1 heading into the final quarter.

And though Nova hit some big threes down the stretch to keep things interesting, Derby were able to hold on.

Amabilino-Perez continued his scoring tear through the tournament with 29 points, Sam Coles had 16 whilst Leyton Elliott-Sewell joined them in double figures with 10.

Manchester Magic vs Sligo
Manchester Magic rotated their bench heavily whilst defeating Sligo All Stars 93-38 in the opening game of the day, setting up a meeting with Derby for fifth place.

Kaiyem Cleary return to action for the host team with 18 points, Josh Pearce had 14 and Mo Abushego 12.

Oisin O’Reilly and Luke McLoughlin led Sligo with 14 each.