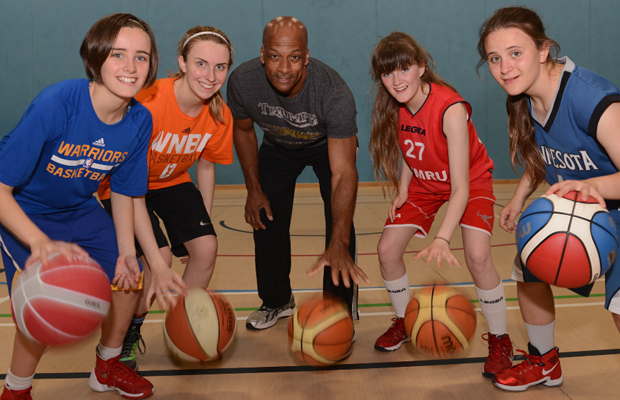 This is a guest contribution from David Edwards, former Deputy Editor of the Rhondda Leader newspaper.

An American basketball coach who caused a sensation when he played for a Wales team more than 30 years ago has returned on a mission to raise the sport’s profile in the Principality.

When he arrived in the Rhondda valley in 1984 David Lawrence became part of the Rhondda Valley based Just Rentals team.

The valley was a hotbed of rugby union with just a handful of spectators turning up to watch the Just Rentals team compete in the Welsh Basketball League.

That all changed when Lawrence captivated fans with his dynamic dunking which soon earned him the nickname “Dai Dunker”.

Valley fans first saw Lawrence in action when the Just Rentals team played a friendly against a Rhondda Select team which had former Wales and British Lions rugby player Tom David as captain.

David said: “I can only describe the way Lawrence played as awesome. Exciting times lay ahead for basketball fans in Wales.”

The valley side became so successful that they stepped up from the Welsh League and entered England’s NBL Division 2 (equivalent of NBL Division 1 in today’s terms) in the 86-87 season.

To the delight of fans, prominent English teams including Murray Metals, Solent Stars and Birmingham Bullets provided the opposition.

High profiled players including Alton Byrd and Larry Dassie were among the those who competed against the valley team. 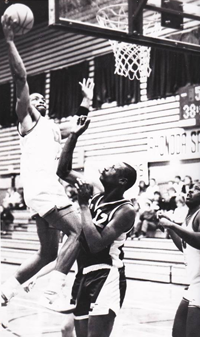 During his playing career in Wales Lawrence was a Great Britain slam dunk champion beating off the challenges of reigning champion Colin McNish and also Steve Bucknall.

Lawrence was the leading scorer in the three years he played for the Just Rentals team with an 48 points per game average (unconfirmed – but we have verified via Dan Routledge that in 1987 Lawrence had played 5 games and was averaging 41.2 ppg and 12.5rpg, whilst shooting 61.5% – Ed) and holds the Welsh scoring record with a 77 point haul playing against Stevenage.

He won several MVP and Player of the Game awards in a team which included fellow American imports Bruce Crump and Andy “Beef” Williams.

The former Appalachian State University player scored 50 or more points in more than 10 times across both the NBL and Welsh basketball league, whilst back in the USA he was the lead scorer in the Summer Pro Am league in Charlotte for five years.

Rhondda based close friend Jimmy Reynolds, who played alongside Lawrence in the Just Rentals team said:

“When David arrived in the Rhondda he soon became a huge favourite with fans and he took the sport to another level in the valley.”

Jonathan Bunyan, another former team mate said: “It is brilliant to see David back in the valley again.
“I am confident his presence here will inspire young basketball players.”

The years that David Lawrence and other American imports spent playing in the Rhondda are still memorable for basketball fans.

Sadly before the end of the 1980s the team disbanded and brought the curtain down on NBL games being played in the Rhondda.

Lawrence’s brother is UK based Renaldo, while his nephew is Great Britain point guard Andrew Lawrence (who dropped 33 points in FIBA Europe Cup this week).

Lawrence, who is a director and coach with Charlotte-based USA Select Basketball, said:

“I had never heard of the Rhondda when I arrived more than 30 years ago. I spent three very special years here and I always call it my second home”.