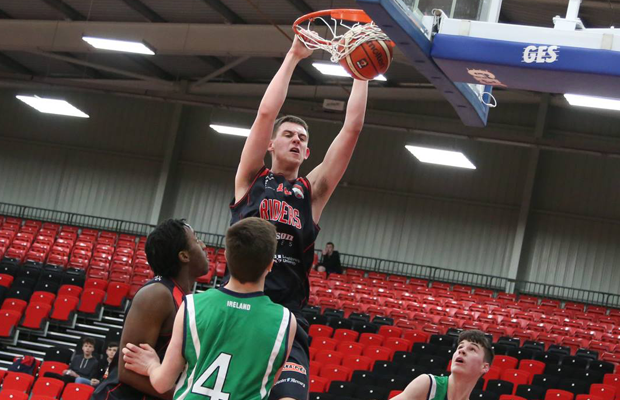 As Henri Langton begins his third and final season in Charnwood, his sights are set high. With US college programmes coming knocking, Langton is looking for a last year in the UK to remember.

The 6’10” England Under-18 is fresh off a third straight summer at the European Championships with the National Team, following an EABL Championship winning season with Charnwood after upsetting Myerscough in the final in March.

“It was an amazing feeling considering we were the underdogs going in,” 1998 born Langton reflected, considering the title amongst the proudest moments of his career to date.

“We had a really tough route to the final, having to play Barking Abbey in the quarter finals without Andre (Arissol) and with me coming back off an injury. We then went away to CoLA and won in a really hostile environment. Then beating Myerscough who hadn’t lost a game for over a year in the final was amazing.

“All of the practices and scouting really paid off, and knowing how much hard work went in to get us to that point just made it even more special.”


Having started playing at the age of 14 with the Leicester Dynamite programme after his sister’s coach noticed his height, Langton worked his way through the national league age group teams (U15, U16 & U18) before choosing to remain local for college, joining the Charnwood programme in 2014-15.

There he has asserted himself as one of the best big men in the country, seeing minutes not only in the EABL and for Charnwood’s U18s, but their Loughborough Student Riders D1 programme, along with a BBL debut last season for the Leicester Riders.

Langton has also been selected for the Hoopsfix All-Star Classic for the past three years, cementing his status as one of the top junior talents in England. He’s quickly become known for his polished offensive repertoire, using footwork, post moves and displaying a shooting touch out to the three point line.

“When I first starting basketball seriously I would work on more position based skills,” he said.

“Being a centre I would work on my touch around the basket, post moves, footwork in the post, hook shots and my midrange jump shot. I would also watch NBA and college basketball games to see how the players of my position and how they play.

“When I played for Leicester Dynamite my coach Dave Harris would work with me on my finishing and my post moves. When I made the move to Charnwood it was Josh Merrington who helped me a lot to further develop my game around the basket and also extend my game away from the basket with face up moves and shooting.”

His first National Team call up came in 2014 with the England Under-16s, helping them to promotion to Division A, averaging 5.4 points and 3.2 rebounds, before returning in the summer of 2015 a year young with the Under-18s and again this summer, where the squad finished a disappointing ninth in Division B.

“Individually I think I performed well in the time I got and played my role,” he said of this summer’s Euros, where he averaged 5.9 points, 2.9 rebounds and 0.9 blocks in a little under 11 minutes per game.

“Going to the European championships is a great opportunity to look at the other players that play your position and see how you compare against them.”

Steve Bucknall’s side started the tournament with three straight losses, but finish with a flourish on the back of five wins in a row to secure a place just outside of the top eight.

“As a team we learnt and grew every game we played, we got better as the tournament went on,” Langton reminisced.

“It’s disappointing not to gain promotion after we picked up losses in the group stage, but we finished on a high winning our later games.”

Despite the disappointment, Langton has no doubt about the importance of representing his country and intends to continue wearing the jersey for as long as possible.

“I think it is hugely important to me, to be chosen as one of the best players in the country and to then have the opportunity to compete at that level. I always feel really proud to represent my country and I look forward to it every summer. It’s something I hope to do for a long time through the GB U20 and Senior Men.”

Now in his final year at Charnwood, Langton includes amongst his goals repeating the EABL title, along with leading the league in blocks (which he did last year), rebounding and efficiency. 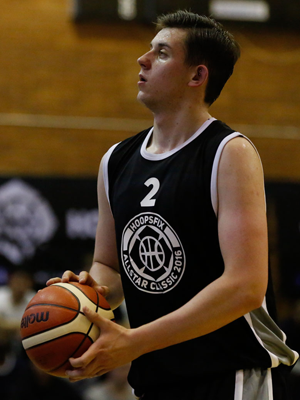 And with a number of NCAA Division 1 schools already pursuing him (Tulane, Iona, Stony Brook, Seattle, and Bowling Green State are amongst those showing interest), his dream of achieving a basketball scholarship to the States is within reach.

“I am hoping to get a scholarship to America where I can continue my education and play Division 1 basketball too,” he concluded.

“I have had lots of Division 1 interest so far and I am in the process of taking visits and trying to find which school is going to be the best fit for me.

“The biggest thing I’m working on at the moment is a lot of S&C work. I’m trying to get a lot stronger and more powerful to get ready for the transition to America. I am also working on my ball handling, my footwork to be able to beat people off the dribble and being a more consistent shooter.”

“Henri is a real pleasure to work with,” he enthused. “He works extremely hard on his game and has invested a lot of time developing his skills. It’s not often you get a guy with his size who is skilled as he is.

“He has developed his shooting a lot over the last year and having a guy his size with the ability to stretch the floor has caught the eye of a lot of D1 coaches in the States. He has a long list of D1 schools that are interested at the moment, so we are trying to help him find the best situation possible, where he will get a chance to play and be developed.”